Ed Droste Blasts Taylor Swift For Being Mean Girl and A Bully: Will She Ruin Grizzly Bear Singer’s Career In Retaliation? 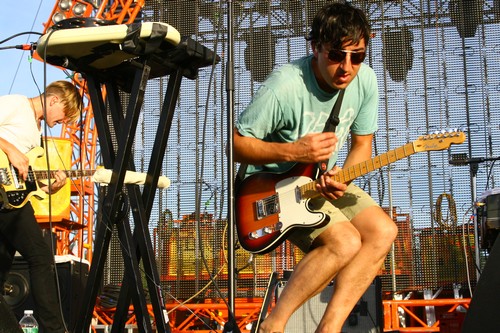 Taylor Swift is a total mean girl and a bully – and everyone is starting to finally realize it. Over the years Swift has been dubbed “America’s Sweetheart” and even told sad stories in magazine interviews about how hard her childhood was because she was the victim of bullying. But, Taylor’s nice girl persona appears to all be a façade – and behind the scenes she is no better than the kids who supposedly bullied her.

Taylor took another passive-aggressive jab at her nemesis Katy Perry over the weekend, and one of her back-up dancers paraded around a stuffed shark during a concert in Boston, just like the one Katy used in Superbowl performance, while Taylor laughed hysterically on stage. Of course, Taylor’s jab at Katy could be totally innocent, but what happened afterwards is really interesting.

Indie singer Ed Droste, from the band “Grizzly Bear” took to Twitter and posted a photo of a tabloid article blasting Swift for being a “Mean Girl.” Droste captioned the picture, “Obsessed that people are finally catching on.” Obviously, Droste’s cryptic blast garnered a ton of questions on social media, and he explained, “Ummmm she’s been given a free pass for too long. Plus, first hand experience…I have a whole other story to tell, still feels unsafe tho. She frightens me genuinely.”

Taylor herself obviously isn’t that scary, but no one in the music business messes with her because of her clout and legions of devoted fans. One diss from Taylor Swift could make or break someone’s career. Ironically, Droste’s accusations are not that far off base, over the year multiple stories have popped up about Taylor bullying fellow artists – and even threatening to ruin their careers. Everyone is dying to know what Taylor did to Ed Droste, sadly we might never know. But, it is beginning to look like Taylor Swift is not the saint she wants everyone to believe she is.

What do you think Taylor did to Ed Droste? Do you believe the reports that Taylor Swift is a bully and Regina George 2.0? Let us know what you think in the comments below!