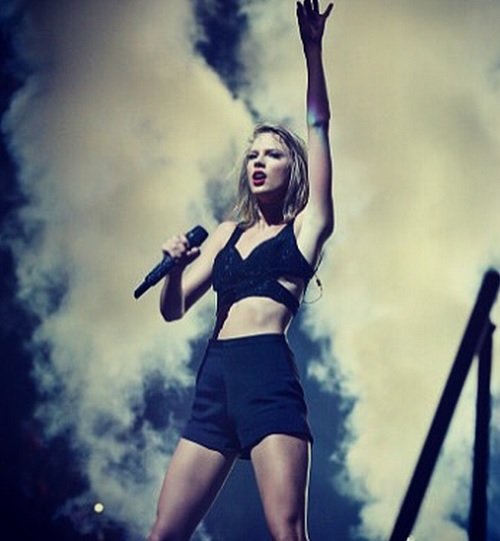 Taylor Swift is always donating her money and time to different causes, but behind the scenes she is not the sweet girl that she likes to make people think she is. Taylor is a total mean girl – and her famous pals are tired of being bullied around by her. Taylor Swift never steps out to an event without a parade of famous friends with her (like Gigi Hadid, Karlie Moss, Selena Gomez, etc). But Taylor makes it very clear that she is in charge and expects them all to fall into line and follow her like sheep.

On June 27, Taylor Swift recruited some of her supermodel pals to step out on stage with her at one of her concerts at Hyde Park Stadium. Taylor’s fans in the audience went crazy when she was joined by Kendall Jenner, Gigi Hadid, Karlie Kloss, Martha Hunt, and Cara Delevingne – and they all seemed to be having a blast. But according to Star Magazine’s inside sources, the models were disgusted by the way that Taylor treated them – and they were ranting about the pop singer backstage.

An insider dished, “Taylor had a dress code for everyone to make sure that she wasn’t upstaged. They were told to stand a certain number of feet behind Taylor at all times, not to speak unless spoken to, and not to discuss Taylor’s personal life in interviews.” According to the backstage source, Taylor’s demands of her “friends” did not go over too well. The insider explained, “Gigi was talking trash behind Taylor’s back, she got Cara and Kendall all riled up.”

Here’s the thing: Taylor’s friends are just as famous as she is – yet she is leading them around as if they were her assistants or employees. Seriously, who tells Kendall Jenner or Cara Delevingne what to say or where to stand? Do you believe the stories about Taylor bullying her famous friends? Let us know what you think in the comments below!