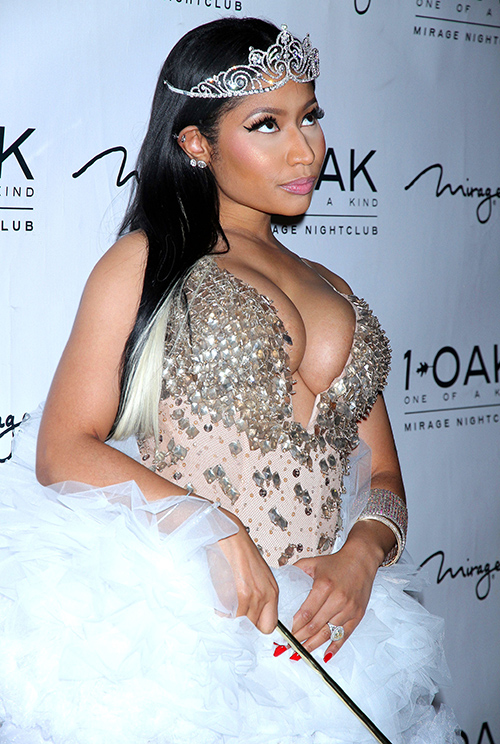 Nicki Minaj is really mad after reading a recent tweet suggesting that the Anaconda rapper owes her career to her backside. Nicki absolutely went off after Bossip retweeted the offensive comment and blasted the gossip site for spreading what she believed to be a big fat lie.

The offensive retweet read, “Yep, men are visual creatures they don’t are if you can sing… That’s why nicki had to buy an ass to blow up! #Fact.” Well that didn’t sit well with Minaj, who believes she’s earned a spot at the top of the rap hierarchy. The Super Bass rapper was so offended by the misogynistic comment that she went on a social media attack in defense of her talent.

“I’ve gone toe to toe w/everyone of your favorite male MC’s. To undermine my skill & diversity as an MC is actually comical @ this point,” Nicki tweeted in response to the offensive jab at her soaring career. Nicki didn’t stop there though and went on to tweet, “I saw Bossip retweeting ignorance so I figured I’d put that out there. Lol. The greats give me my respect. The great journalists as well.”

“If a male rapper was on tracks w/Wayne, Jay, Eminem, Kanye, etc going ROUND 4 ROUND he’d b hailed as a GREAT as well. Jealousy is a disease,” Nicki blasted in anger at the rude retweet. “Not giving me my props doesn’t stop me from being great. I am a mogul. Your hate is what made this possible. Lol. Thank uuuuuu! Mmuuaahhh!!!”

In her fifth tweet in just a few moments, Minaj continued on her tirade, “To imply someone’s ass is the reason they get on tracks and hold their own with every great MC who is still alive black ppl, do better lol.” Perhaps the Pinkprint rapper feels like all might be equal when she said, “Lol. R the male rappers only successful cuz they have a big bulge.”

After Nicki Minaj used the suddenly huge audience to plug her role in the upcoming Barbershop sequel, Minaj signed off with one final message that said. “Your greatest achievement in life will be attempting to undermine my greatest achievements in life. lol. Now check that. Phaedra voice.”

Nicki contends that she can hang with all of rap’s greatest and she truly has shared tracks with a lot of hip hop’s heavy hitters. Does that mean Minaj didn’t get a little kickstart to her career because of her memorable assets? Well, one of her biggest singles yet is all about her butt, so maybe if Nicki Minaj wants to be known for her talent she should rhyme about that instead.