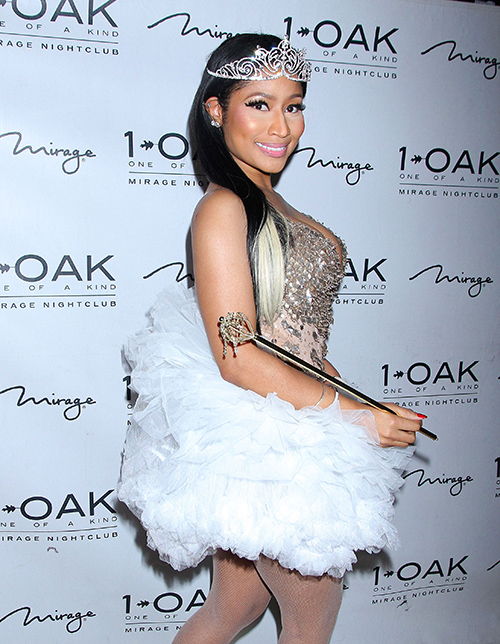 Jennifer Lopez opened the American Music Awards on Sunday, November 22 with a music mash-up that included Nicki Minaj’s “Anaconda” and based on the incredible side eye that Nicki threw at J. Lo during the performance, she definitely wasn’t impressed.

J. Lo took the stage at the AMAs and to remind everyone that before she was an “American Idol host, Jennifer was a Fly Girl. The “Booty” singer also wanted to remind us all that before there was Nicki Minaj and her voluptuous booty, there was Lopez herself who started the trend.

Lopez danced to a montage of all the year’s most popular songs. Naturally, when Jennifer started gyrating to Minaj’s “Anaconda” the camera panned over to Nicki who was thoroughly unimpressed with the performance. As a matter of fact, the look on Nicki Minaj’s face was a mix between disbelief and disgust.

Some may not remember that Nicki Minaj was a judge on “American Idol” just like Jennifer Lopez except when Nicki was on the show, she had a pretty explosive feud with fellow judge Mariah Carey. It was during the time that Nicki and Mariah were fighting on the reality competition show that the ratings plummeted. Many fans gave up on the original singing competition show and Lopez blames it on Minaj.

There was a bit of bad blood again last year during a Fashion Rocks event when J.Lo made it clear that she wasn’t all that impressed with “Anaconda” either. Apparently, Jennifer’s boyfriend, Casper Smart, choreographed the moves for “Anaconda” and that made Lopez a bit uncomfortable. Jennifer played it real cool during Nicki’s performance of the popular song during the 2014 event.

So just a year later when J.Lo is suddenly dancing to “Anaconda” like she owns it, it’s a bit understandable that Nicki might feel like the performance was an intentional poke. To be honest, it probably was Jennifer’s way of reminding everyone that nobody cared about a round booty until Lopez started getting famous. In a way, J.Lo paved the way for artists like Nicki Minaj but you will never hear the “Super Bass” admit that Lopez was an inspiration in any sort of way.