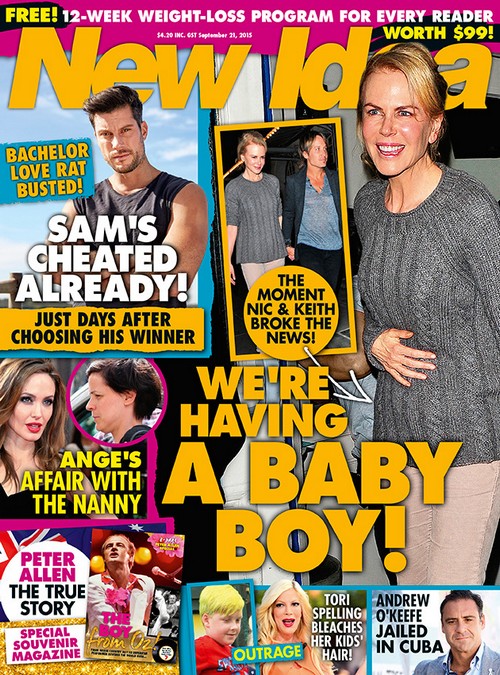 Nicole Kidman is pregnant with a baby boy according to the latest report! It’s no secret that Nicole Kidman desperately wanted to have another baby with her husband Keith Urban, and she was certain that it would prevent them from getting a divorce amidst their marriage woes. Nicole was reportedly having fertility issues because of her age and was rumored to be visiting a doctor for treatments to help her conceive. According to this week’s issue of New Idea Magazine, it all paid off because Nicole is pregnant with a baby boy! Do you think Nicole is pregnant or is New Idea mistaken?

This week’s cover of New Idea Magazine features a photo of Nicole Kidman, appearing to be clutching her belly while she smiles. The headline teases, “The Moment Nic & Keith Broke The News: We’re Having A Baby Boy!” The Australian magazine goes on to say, “Currently starring on stage in the play Photograph 51 in London, Nicole Kidman couldn’t hide her excitement as she took a stroll with husband Keith Urban. With her hand placed proudly over her tummy, the couple – who had all but given up on their hope of adding to their family – are revelling in their thrilling news.”

Nicole Kidman and Keith Urban already have two daughters together, whom Nicole complains that Keith never sees because he is always on tour or shooting American Idol. It will definitely be interesting to see how long the happiness of getting pregnant lasts and reality sets in – and Nicole and Keith realize that they still have the same problems in their marriage that they had before they conceived. You would think that by now these celebrities would realize that having a baby doesn’t top a divorce – it just prolongs the inevitable.

Do you think that Keith and Nicole will stay together, or could their marriage be over before she even gives birth to their third child? Let us know what you think in the comments below!