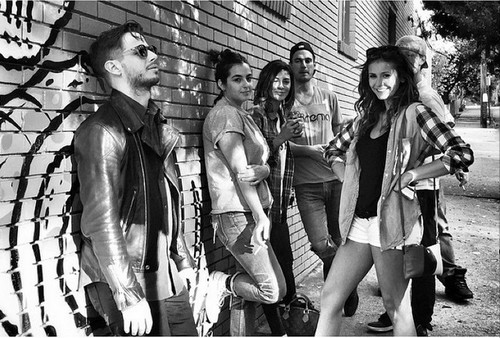 Nina Dobrev and Ian Somerhalder are reportedly fighting over the Nikki Reed wedding, or in other words, what else is new? It seems like these three have been embroiled in a love triangle – whether fictional or real – for the past five months, give or take another five months. Rumors say that Nina Dobrev demands that Ian Somerhalder break up with Nikki Reed and cancel wedding plans.

Nina and Ian used to date, and everybody knows this. In fact, they dated for several years before breaking up, allegedly because Nina wasn’t ready to settle down and Ian was. So of course, Ian waited a while and then went and found someone who wanted the same things as him – Nikki Reed. The two got engaged after only a few months of knowing each other, even with Ian knowing that he’ll have to continue working with Nina. The Vampire Diaries writers may have taken pity on the two, since they kept Ian’s character and Nina’s character apart for a significant amount of time. However, plot lines soon converged and Nina and Ian were once again making out, as per the show’s requirements. And no matter what people say, you cannot kiss an ex and expect to feel nothing – it’s just not human nature.

So of course, Nikki started getting jealous of Ian’s intimate scenes with Nina – and how that segued into Ian and Nina spending more time together. And now, apparently, Nina wants Ian back. Thus, that’s leading to even more in-fighting with in the group; Nina and Ian fighting about getting back together and how Nina wants Ian to dump Nikki, Nikki fighting with Ian because she’s jealous and insecure, and Ian more confused than ever.

What do you guys think? Does Nina Dobrev really want Ian Somerhalder to dump Nikki Reed and cancel his wedding plans, and if he does, will she get back together with Ian? Let us know your thoughts in the comments below.