Nina Dobrev Cozying Up To Norman Reedus: Trying To Land A Part On The Walking Dead? 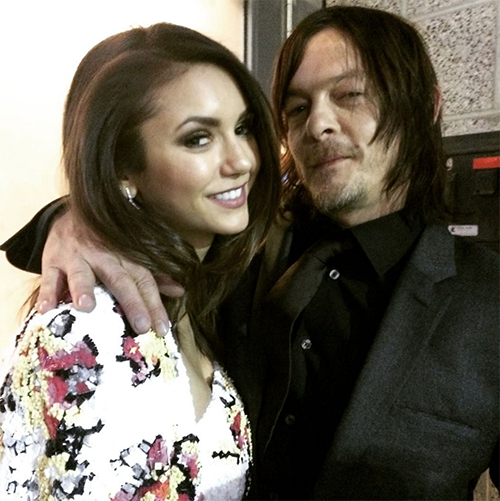 It’s pretty clear that Nina Dobrev’s decision to quit The Vampire Diaries for a shot at movie stardom isn’t working out as well as she had planned. Producers haven’t exactly been beating down her door with parts. Rumor has it that Nina really has no choice but to head back to the small screen – so it seems logical that she would choose a show as huge as “The Walking Dead.” If she is going to settle for another TV show, it might as well be a huge one!

Nina Dobrev shared a photo of herself cozying up to Norman Reedus (Daryl Dixon) at the American Music Awards, and Instagram began buzzing that Nina might have joined the cast of “The Walking Dead.” It’s not a far stretch to go from “The Vampire Diaries” to “The Walking Dead” – both shows have a similar fan base, and you know are based on things that would never, ever actually happen in real life.

If the former “The Vampire Diaries” actress hasn’t joined the cast of “The Walking Dead” quite yet – there is no doubt in anyone’s minds that she would jump at the opportunity considering the lack of job offers in her life. And, if you are trying to land a gig on “The Walking Dead” – then short of the actual producers, Norman Reedus is the guy that you should be impressing. Let’s face it, if Norman Reedus “puts in a good word for you” or requests that the producers take you in to consideration for a part, you basically have the job in the bag.

What do you guys think? Is Nina Dobrev planning her big comeback on AMC’s “The Walking Dead?” Could she already have joined the cast and that is why she shared a photo of herself with Norman Reedus? Let us know what you think in the comments below!