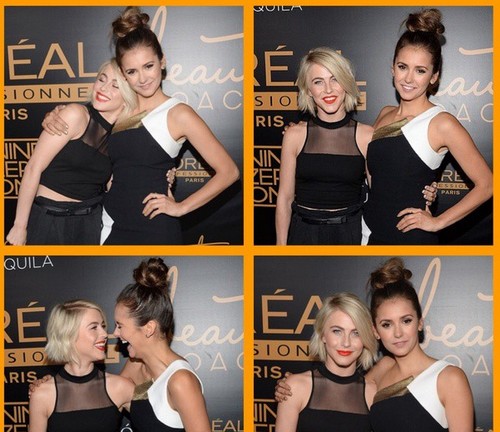 Nina Dobrev is relieved that Ian Somerhalder is engaged and finally out of her life! Nina could be wallowing in self-pity and anger, but she’s doing the exact opposite – she’s going out, getting photographed looking fantastic, and having fun. What better way to get revenge on your ex-boyfriend Ian Somerhalder who’s engaged to his new girlfriend, Nikki Reed, your former friend, right? Sources at a recent event in Los Angeles even confirmed to E! Online that Nina was in ‘great spirits’, and didn’t seem at all upset about Ian Somerhalder being engaged to Nikki Reed.

In all seriousness, sources tell us that Nina Dobrev is actually relieved that Ian Somerhalder and Nikki Reed are engaged. For one, Nina will never have to kiss Ian again and it’s stopped the incessant speculation that Nina and Ian will get back together, especially from Vampire Diaries fans who don’t want to give up on their OTP being reunited in real life. For another, this more or less keeps Ian out of her life forever, and why shouldn’t Nina be relieved about that?

For another, Nina’s career is doing better now that she’s no longer dating him, and for another, it’s not like she and Ian were any great shakes at staying friends after their break up anyway. They struggled to remain professional on set, but they managed to get through their scenes together, at least – but now, the lingering chemistry and tension will be completely gone, especially from Nina’s end. She doesn’t have to pretend to care about what he’s doing or who he’s seeing, and she can continue dating whoever she wants without people orchestrating to get her back with Ian.

Plus, Ian’s engagement has the positive/negative side effect of increasing media attention on her without her doing anything – and we all know The Vampire Diaries cast loves their free publicity. Why not enjoy the influx of PR while it lasts?

What do you guys think? Do you believe that Nina Dobrev is relieved that Ian Somerhalder is engaged and out of her life forever? Let us know your thoughts in the comments below.