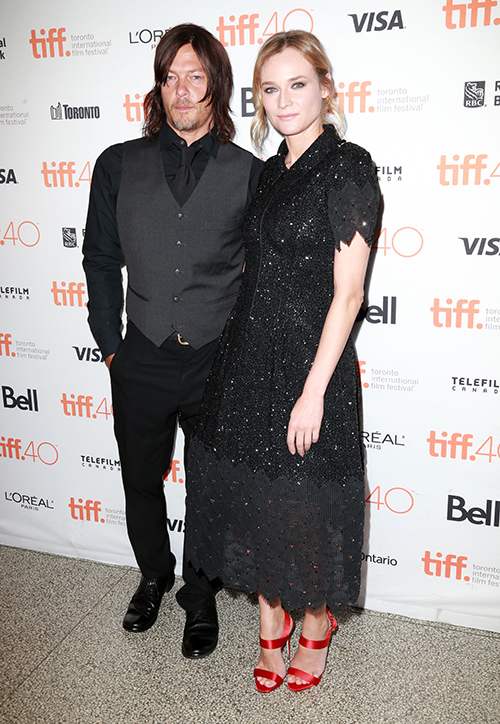 Norman Reedus and Diane Kruger were spotted by several witnesses making out a bar on Friday night. Did Joshua Jackson lose out to the ‘The Walking Dead’ star or is it a cheating scandal?

Norman was rumored to be dating 21-year-old model Cecilia Singley, but the two reportedly broke up very quietly. Following the split, Reedus was said to be starting a romance with his former co-star, Emily Kinney, in June of 2015. However, both camps denied the TWD stars were dating and the two haven’t had much interaction since.

After Norman Reedus and Diane Kruger filmed, ‘Sky,’ the pair were allegedly caught kissing passionately over the weekend. Multiple witnesses claimed to see Reedus and Kruger “wildly making out” at 12th Street Alehouse. Joshua Jackson is currently filming a project in the Philippines, but sources swear to have seen Norman and Diane arrive at the bar, order drinks, and then make out in front of the bar.

“They were laughing and having fun and then she just literally got out of her chair and straddled him and we were all like, ‘what the hell,'” one NY Daily News source explained. “They were all over each other. She was a lot more aggressive than him.”

Now, if Joshua and Diane were still together, why would Kruger be so bold as to cheat so openly at an East Village dive bar? The German beauty seems like she isn’t a moron, so unless she took a page  from LeAnn Rimes book (easily titled ‘Cheap Tricks for Cheap Tricks: How to Have an Affair Like a Dumbass’), it’s hard to believe it would be a cheating scandal. Of course, Norman’s rep denied the kissing story and Kruger’s publicist refused to even comment on the matter.

So, did Joshua Jackson lose out to Norman Reedus? Did Diane Kruger break up with the ‘Dawson’s Creek’ star after dating for 9 years? Let us know what you think in the comment section below and keep your eye on CDL for more news and updates on your favorite celebs.