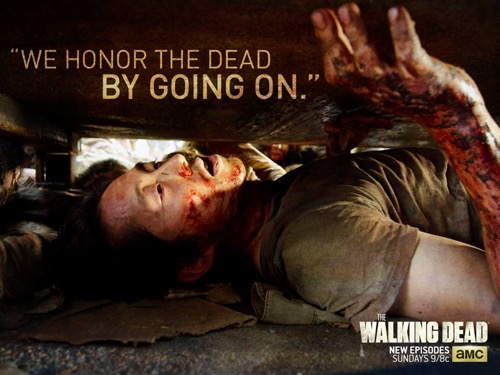 Is Norman Reedus being killed of ‘The Walking Dead’? Spoilers tease Reedus’ character, Daryl Dixon, being shot in one of the final episodes of the season. Would AMC and TWD creator Robert Kirkman actually kill off the fan-favorite character?

It’s a possibility! Kirkman has said on several occasions that no character on ‘The Walking Dead’ is ever or will ever be “safe.” In a Reddit AMA, Robert Kirkman explicitly stated, “In my opinion, I feel like characters ripen like fruit. So while I wouldn’t say the more popular a character is the more likely they are to die, they do have to reach a certain level of popularity before they’ve ‘earned’ the death. No character is too popular to die. (Suck it, Reedus!)”

In fact, this isn’t the first time Robert teased the possibility of Daryl Dixon’s death on TWD. Fans trying to ensure their beloved Norman Reedus isn’t axed from the show came up with the slogan – “If Daryl dies, we riot!” During an interview with CNN Robert responded to the riot threat quipping, “Specifically about the Daryl thing–that fan reaction is going to get him killed. I feel like it’s a dare. Like, ‘Oh, really? You’re gonna riot? We’ll see…we’ll see. No one is safe.”

So, perhaps there is the possibility Daryl Dixon dies during season 6 of ‘The Walking Dead.’ According to the Spoiling Dead Fans, a scene from episode 15 details a specific scene in which Dwight returns. In the spoiler, the plot details Glenn and Michonne are captured by the Saviors. Trying to rescue the duo, Rosita and Daryl are discovered…

“Glenn and Michonne try screaming to get Daryl’s attention and let him know the Saviors are still there. All of a sudden Dwight calls out to Daryl,” TSDF claim. “Dwight is right behind Daryl with a gun pointed directly at his back. Another Savior has his gun on Rosita. As Daryl turns around, Dwight pulls the trigger. “BANG!” Blood sprays everywhere. This is supposedly the end of the episode,” the group notes.

Of course, a LOT could change during the winter break hiatus. TWD doesn’t return until February 14 picking up at episode 9. What an ideal way to celebrate Valentine’s Day.
Will Norman Reedus be killed off of ‘The Walking Dead’? Are the reported spoilers teasing Daryl Dixon being shot just a red herring? Let us know your thoughts in the comment section below and keep an eye on CDL for all the news and spoilers for ‘The Walking Dead.’