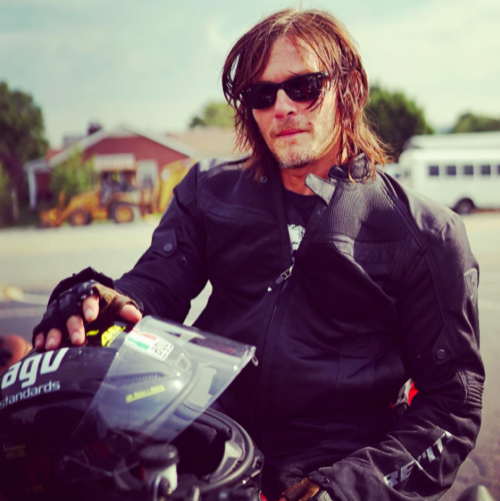 “The Walking Dead” star Norman Reedus just landed his very own TV show! And, it’s not another Walking Dead spinoff! Since Reedus debuted on “The Walking Dead” as Daryl Dixon, he quickly became a fan favorite and his career has skyrocketed to superstardom. It’s no wonder AMC wanted to cash in on Norman’s insane popularity by giving him his own reality show.

Norman Reedus’s new reality show is titled “Ride With Norman Reedus.” It’s no secret Norman has a passion for motorcycles, an AMC film crew followed “The Walking Dead” actor as he hit the road on his motorcycle and visited different motorcycle mechanics and collectors around the country – all while exploring the motorcyclist culture. Each episode will feature a special guest, a celebrity of some sort, who will be hitting the road with Reedus.

AMC’s president of programming Joel Stiller released this official statement regarding Norman’s new TV show, “We love being the home of people’s passion projects, and there is nobody more passionate about motorcycles than Norman Reedus. He is an avid rider and aficionado who is deeply immersed in motorcycle culture. There is also nobody more fun to hang out with. This show will bring those two elements together for a weekly ride into the incredible world of motorcycles and the people who live and breathe them.”

“Ride With Norman Reedus” will premiere on AMC sometime in 2016, and the first season will contain six episodes – each taking place in a different city. So far there is no official air date. Anything that Norman Reedus touches right now has “hit” written all over it, and the whole motorcycle theme is just an added bonus. Are you as excited as we are to Norman’s new show on AMC? Do you think it will be a success? Share your thoughts in the comments below!