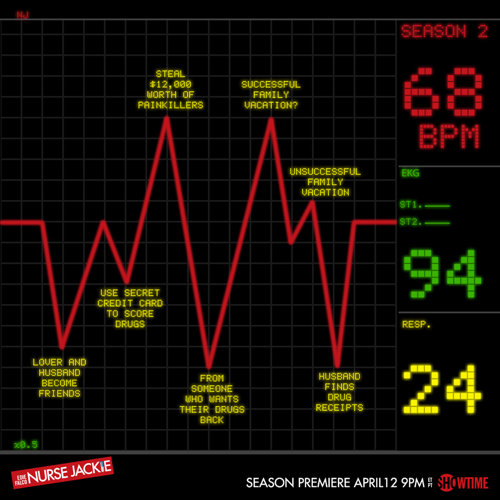 Tonight on Showtime the twisted and darkly funny NURSE JACKIE is back with an all new Sunday season 7 premiere episode called, “Clean.” On tonight’s season premiere episode the show picks up at Jackie’s [Edie Falco] arrest.

On last week’s episode Season 6 ended with Akalitus ordering Jackie to take a drug test or admit that she’s using drugs. Meanwhile, Coop confronted Jackie, but she revealed to him a big surprise. Did you watch the last episode? If you missed it we have full and detailed recap, right here for you.

On tonight’s episode per say the Showtime synopsis “picking up with her arrest, Jackie suffers through detox. Season premiere.“

On #NurseJackie, we see Jackie having her mugshot taken. Her personal items are taken from her at the jail. She has her blood taken then she’s cuffed and led to a cell. She asks the cop how long until her arraignment and he says it will be a few more hours. A woman is on the phone in the cell and asks Jackie what the f-k she’s looking at. Jackie sighs and sits. Rosa tries to talk to Zoey but she walks off and Thor asks her to come have drinks. Gloria asks Eddie if he’s heard from Jackie but he says no.

Then he gets a call from the police station from Jackie who tells him she got arrested. He pretends it’s his mom to throw off Gloria. She says she feels like shit and he says he’ll come get her but she says no and says to just make sure they’re covered. He tells Gloria that his mom is tough and Jackie tells him she’ll be out in a few hours and not to come to the jail. He tells her to hang in there. The guards bring food to the cell and Jackie asks why she’s not out.

She tells him she’s sick and is detoxing and feels like shit. She tells him she’s a nurse and begs him for medical help. He tells her to hold on. He hands her a kick kit to help with the withdrawals. It’s Immodium and Handi Wipes. She’s furious. She’s getting sicker and shakier as she sinks into the DTs. A woman in the cell asks if she can help and Jackie asks her to just talk to her. She says she was picked up for smoking pot on her porch and Jackie says she’s done worse too.

Jackie slumps to the floor and the woman calls for the guards. Jakcie wakes cuffed to a hospital bed and they tell her she’s in Bellevue and has been there for two days. Herman, her public defender, is there and she’s shocked to hear they put her through sedated detox so she’s clean. Herman says she’s been charged with drug trafficking. She tells she was on the way to Miami to help with hurrican relief and that’s why she had the meds. She says she has a life and job to get back to.

Herman says that’s a big if. Jackie gets her personal items and sees that $400 is missing but the cop slipped her a few of her pills there in replacement. He hands her a bottle of water to take the pills. She leaves the cop shop and wanders into All Saints. She asks Zoey if they can talk but she tells Jackie no. Jackie says she has to hear her out and Zoey offers her ear. Jackie thanks her and Zoey asks for what. Jackie says she’s clean thanks to her and says she went through detox and is in out-patient rehab.

Zoey says she can’t believe anything she says and tells Jackie she needs to leave. Jackie stands and then Zoey asks where she went through detox. She says Queens Recovery Center. Zoey makes a note of this. Jackie is at Queens Recovery Center and makes an appointment for intake. At the hospital Thor and Carrie are moving a patient but Coop swoops in and says no lifting patients in her condition. He and Zoey help instead. Zoey looks sad.

She calls Queens Recovery and says she’s Jackie Peyton calling to confirm an appointment. She’s doing a strange accent then is told she’s confirmed for 2 pm tomorrow. She hangs up and deletes the photo of the dead nun from her phone. She seems very relieved. Eddie forges a form with Gloria’s signature. Zoey tells Gloria that Jackie has detoxed and joined a rehab program. Gloria says Zoey deserves credit and says she’s making her Head ER Nurse.

Zoey says they’ve never had an official head nurse. Gloria says she’s going to do things differently and needs Zoey on board. Gloria says they’re not talking about Jackie but about Zoey and the future of the ER. Gloria says it’s time to move forward. Zoey says she doesn’t feel right about it and says no thank you to the job. Gloria tells her to think about it for a while. She agrees. Jackie is at a makeup shop putting on some makeup and a woman comes to help her.

With makeup on, Jackie heads to the bar to see Kevin. She says she comes in peace and says she hopes they can be adults for the sake of the kids. She says Mia can’t be the gatekeepers to her daughters and says she wants to see the girls. Kevin says she can’t see them at all. He says she’s a drug addict and it’s not safe for them to be around her. She says she’s sober and not using and he laughs then asks where she was for the past week. She says she was at a detox problem and he says he knows she was in jail.

He says Grace and Fiona could have been with her when she crashed the car. She says she’s clean and is starting new. Kevin says there’s nothing new about his and he says all his compassion is for his daughters, not her. Jackie tells him not to use this against her and kick her when she’s down. She tells him not to be an asshole and storms out. Coop walks Carrie home carrying a new microwave. He asks why she’s never let him see her place and they go in and he sees it’s a wreck.

He sees that a gas burner was left on and is worried. She asks what he thinks about her place and he asks how much the place is worth. He says they should sell their places and get a bigger place for the three of them. Carrie says she doesn’t own the place and says that’s a big life change. Coop kisses her and then it’s awkward. He looks around at the mess and asks what the smell is. Jackie meets with Barry Wolfe, a high-powered attorney.

He tells her his mother was a nurse and he knows the sacrifices they make. Barry says he knows the stresses that can come with that line of work and the silent dangers. She says she just wants her job back. Barry says he doesn’t want to waste her money and says she doesn’t see a scenario where she gets her license and job back. He tells her her case doesn’t meet his criteria and tells her to go. Eddie is waiting at her house and calls her a criminal then gives Jackie a big kiss.

She says she’s radioactive and he shouldn’t be there. He says he forged Gloria’s name to cover for her and says she’s not getting rid of him. Jackie tells him this is all crazy and he says it could be worse. He says she could be in Miami and he could be wondering when he would see her again. They kiss again and she says she missed him. They start making out. Grace comes to see Zoey at work and asks if she can crash with her for a few nights.

She says her dad and Mia are driving her crazy and she needs a friend. Zoey says she can’t just leaver her family and stay with her. Zoey says her mom is in rehab but Grace says her mom just got out of jail. Zoey flips and marches to Gloria’s office. She tells her she thought about it and wants the Head Nurse position. Gloria says good. Zoey asks what it entails. Eddie asks Jackie why they’re still on her porch and she hands him the packet of pills the cop gave her then asks him to help her clean the house.

She says she can’t not be a nurse and needs her life back. Eddie agrees to help. Jackie says no one believes anything she says and they all look at her like she’s a junkie. He asks what she’s going to do. Next day, Jackie heads to the hospital and everyone is shocked when they see her come to work. Coop and Carrie stare. Gloria asks what the hell she’s doing there and Jackie offers to pee in a cup. Gloria sas she’s not welcome there and then says she’s fired.

Jackie says she’s worked there for more than 20 years. Gloria says she tried to help her and she walked out on her. Jackie says she went to a detox place but Gloria yells and says she’s a dangerous junkie and is probably high right now. She screams at her to get out of her ER. Zoey and Thor and everyone else stare while Gloria screams at her. Jackie gets her coat and walks out. She smirks and then goes back to Barry Wolfe and says she was wrongfully terminated and defamed. Barry says he can work with that.