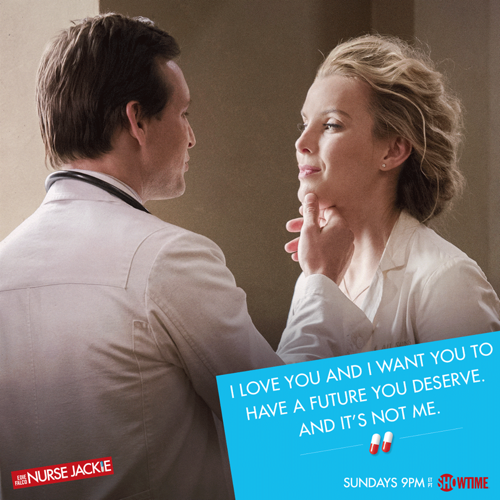 Tonight on Showtime the twisted and darkly funny Nurse Jackie is back with an all new Sunday season 7 episode 5 called, “Coop Out,” and we have your weekly recap below. On tonight’s episode, Jackie [Edie Falco] stirs up trouble when she rallies her co-workers against the developers, but an attractive offer challenges her allegiance.

On last week’s episode, Akalitus doesn’t trust Jackie when she shared the news that the hospital was being sold to Norwegian developers; Carrie meets Coop’s proposal with an unexpected reaction that caused him to make a major life decision; Jackie’s dealing took a surprising turn when she got strapped for cash. Did you watch the last episode? If you missed it we have full and detailed recap, right here for you.

On tonight’s episode as per the Showtime synopsis “Jackie stirs up trouble when she rallies her co-workers against the developers, but an attractive offer challenges her allegiance. Meanwhile, Coop prepares for his last day at All Saints, and his replacement arrives and surprises everyone with his carpe diem attitude.”

Tonight’s premiere episode looks like it is going to be great and you won’t want to miss it, so be sure to tune in for our coverage of Showtime’s Nurse Jackie tonight. While you wait for our recap hit the comments and enjoy the sneak peek of tonight’s episode below.

#NurseJackie begins with Jackie and Eddie out for a walk. He says people are looking at them because they have what people wants. She says the suitcase full of drugs is making her nervous but he says he has a guy that can take them off his hands and isn’t someone she slept with. She thanks him for dealing with this and he drops her off at work and tells her to keep her head down. Jackie runs the meeting about the hospital closing and says they have to stop them. Thor and Zoey and a bunch of doctors are there and they hear that a bunch of Norwegians are planning on turning it into condos.

She sets another meeting then adjourns this one. Jackie tells Zoey she’s got to go to her NA meeting to day. Coop shows Thor a new house he found and Thor asks if he’s excited about the move and the new job. He asks if Coop wants a going away party but he says no. Coop greets Carrie who rolls her eyes. Gloria introduces Dr Bernie Prince from the ICU who is replacing Coop. (It’s Tony Shalhoub!). He rushes over to a gurney he says should be moving faster then sees a dead patient they called on the way over.

He slams the guy in the chest and he gets a pulse. He was dead and Bernie brought him back to life. He tells Jackie he always wanted to try that then goes back to eating his donut. He finds Jackie later and asks her to pop his shoulder back into joint. He threw it out saving the guy. She says she can’t touch patients but he says he’s a doctor. He says she’s good and she says – for a janitor. Jackie sees the Norwegian contingency walk by.

She wheels the dead body on by. She sneaks into a presentation about the condos. It shows the luxury condos and what they’ll make of All Saints. It’s a glossy high rise of condos that begin at $3.5 million. Investors ask about public pressure to keep the hospital open. One man says they have conflict resolution experts to deal with this. Gloria isn’t happy to see Jackie there and hands her the pitcher she was holding.

Coop makes his last stitch at All Saints on a patient and Carrie asks if he’s okay. Zoey says he seems excited about Boston and he says there’s cool stuff there and he even joined a rowing club. He seems perky and says he’s “wicked excited.” Carrie says he seems cuter today. Jackie makes an announcement and says the meeting is tonight at 5 because she has new information. She mops as one of the Norwegians approaches her.

He says he has a lot of respect for her profession and asks isn’t she a nurse – he even knows her name. He says she’s also the organizer and says he works with the development group and says his job is to make sure everything goes smoothly. He says he wants to expedite the reinstatement of her nursing license if she’ll back off organizing the protest. Jackie asks doesn’t he have bigger obstacles but he says he’s a detail person and tells her to take the afternoon to think about it.

Zoey tells her she’ll need more chairs for today’s meeting. Coop is packing his office when Carrie comes in and says she has a surprise for him. She shows him two box seats to a movie night at the Philharmonic and says the play all the themes to his favorite movies. She says it may be the most thoughtful thing she’s ever done but Coop says he’ll be in Boston. He says it might be easier if they just don’t see each other. She says she’s sorry and he says it was a nice idea.

Carrie says she’s sorry that she wasn’t ready and he says he is too. Bernie works trauma when a bunch of patients come in – Jackie watches them all come through but she can’t help. The new guy, Angus, is struggling to get the monitor working. Bernie finally tells Angus to step away. He calls for Jackie and says he doesn’t give a shit about diversion and says they need her. She steps in and puts on gloves. She’s thrilled.

Gloria watches through the glass very displeased. After, she tells Zoey that was really fun even though she knows it was a one time thing. Jackie sees the Norwegian getting off the elevator. Later, she finds Bernie outside the NA meeting – he’s puffing a banana scented e-cigarette. He asks how her meeting went and she says it was the usual. He thanks her for jumping in but she thanks him and says it was the best thing ever. He says it would be a shame if All Saints closed.

He says the woman they saved would have died if she had to wait to get to a hospital uptown. He asks how long until she gets her license back – she says three months and the hospital could be gone by then. He says he heard an activist nurse is trying to save the place. He says if it’s going to close in a few months, they should make it a great fucking few months. She tries his banana cigarette and says it’s gross. They come in laughing and Gloria lashes out at her. She says she made it clear not to touch patients.

Bernie says it’s his fault because it was his first day on the floor. Gloria says he needs to be clear and Bernie asks her to sit down with him at lunch to go over the rules. She asks how her disciplining him turned into lunch but it got the focus off Jackie. Coop says he’s going to be heading to hang with Matt and Ben in Boston. Thor says Coop will find someone to annoy up there but asks who will annoy them. Bernie asks why they’re not having a going away party. Coop says he didn’t want one.

Bernie says to give him 20 minutes to make calls then says he’s the new boss. Coop says he likes them and now he doesn’t want to leave. Jackie says you do what you gotta do. She heads down the basement. Thor says they’re all concerned about the rumors then introduces Jackie. She says she’s afraid they’re wasting their time. She says she did some digging and the reality isn’t good. She says it’s over and the fight is done. She says she has better things to do with her time.

Zoey tells Jackie she thought she was going to save this place. Jackie says she has shoveled enough shit for this place. She says that the Norwegian was there and heard her. Gloria meets with Coop and hands him forms to sign and he asks if that was his exit interview. She asks if he wants more. He signs the papers and hands over his ID badge and key card. He says he has one more thing and hands over an otoscope. He says it’s great for setting up TVs. She asks if he’s mad for him jumping ship.

But Gloria says she wishes she had taken one of her other job offers. He asks if she wants a hug and she acts like she doesn’t but then embraces him warmly and says he’s getting out of there just in time. Jackie goes back up to the conference room and grabs the flash drive out of the computer. Her basement buddy startles her then jokes that Norwegians aren’t scary. Coop asks Jackie if she’s coming to his party but she says things are too weird. He hands her a gift and says it’s a St Agatha medal.

He says she’s the patron saint of nurses. She tells him to have fun at his party and he heads off with Bernie. Bernie arranged a Jewish blow out at Sammy’s Romanian restaurant. Gloria drinks with Thor at the party then goes off to pee while Thor goes off to dance. Then he heads over to Eddie to dance with him. Eddie asks him to shield him from Gloria then asks where Coop is. He’s banging Carrie in the closet. Then he stops and she asks if he’s being sad. He says he is sad and she straddles him and tells him to say how sad she is.

Carrie comes back to the table looking mussed and Eddie asks who the guy is and he says it’s Bernie. Coop comes to greet Eddie then Bernie calls Coop to the stage. Coop says go Sox and they boo him. He thanks Bernie for arranging then says it’s hard to say goodbye. He says they’re his people. Eddie says he loves him and Coop tells Eddie he’s going to miss him. Coop tells Gloria she’s been a like a mother and says he has enough of those.

Coop says Zoey she’s the nicest woman in the world and a damn fine nurse. He calls Thor his Viking and thanks him for having his back. Then he says Carrie changed his life and thanks her. Then he says one more thing and says this may make others uncomfortable but says there’s one more person to think. He says Jackie made his life a living hell and is the most important one. He says she also made him a better doctor. He says – thank you Jackie wherever she is. She’s at the New York Times anonymously dropping off the flash drive she stole from the Norwegian meeting.