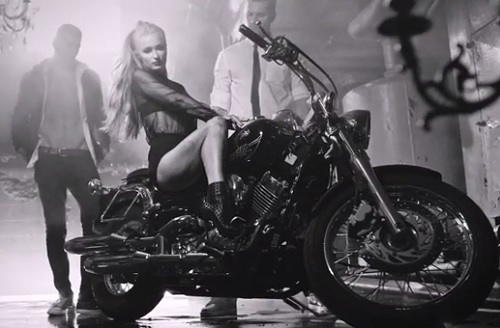 Socialite and superstar Paris Hilton has recently debuted the music video for her brand new single, “High Off My Love,” which features the rapper, Birdman. The steamy music video shows Paris Hilton looking incredible, in a very sexy outfit singing the words, “Do you want to get high off my love?”

The video has been described as “a sexy and seductive dance track with a rap music vibe.” The video is very intimate and allows Paris Hilton to show off her amazing body in a dominatrix-like body suit, complete with chokers and chains. As the 34-year-old socialite would say, “That’s hot.”

Throughout the music video Paris Hilton is seen getting very intimate with a mystery man on a motorcycle, and also laying on a zebra print rug while wearing sexy lingerie. The edgy video is definitely one to watch and her fans are loving it.

Her fans have taken to Twitter and other forms of social media to show their support of Hilton’s fast rising music career, and are so excited for more music from the star.

Birdman makes his rap cameo while wearing a red hoodie, sunglasses, and blowing smoke out of his mouth, all while women in lingerie are seen making out with male models.

Paris Hilton signed with musical power house Cash Money Records back in 2013. The label, which was co-founded by Birdman, has become known for producing rap heavy hitters like Lil Wayne, Nicki Minaj, Drake, and Tyga. Now, Paris Hilton’s musical career is next. Hilton has been seen deejaying at some of the hottest clubs around, and we are sure that her music will be of the same caliber.

Paris Hilton will have a single release party for her latest single, “High Off My Live” in Cannes on Friday, May 14. Be sure to check out the music video and let us know what you think. We promise you will not be disappointed.