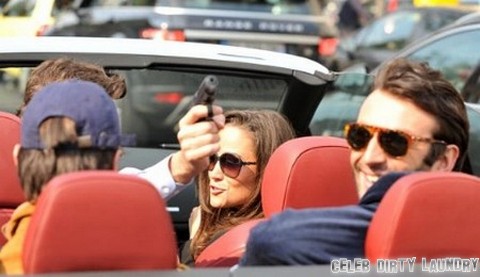 We recently reported all the details on Kate Middleton and Prince William’s expected due date and all the three hospital birthing contingency plans but now we have received word that Pippa Middleton, Kate’s sister, most likely will not be the godmother to Kate’s soon-to-be born baby. Here’s why.

“Tradition for godparents is not to choose members of the family, certainly not the immediate family. I think it is possible she might choose a good friend from university this time. When they pick people to be godparents, they’re putting them into the spotlight and some of their friends really don’t want that, to be in the spotlight, so it will definitely be someone who is kind of willing to take that on,” said royal correspondent for the The Daily Mirror, Victoria Murphy, to ABC News.

ABC News first broke the news because many people have expressed that they want Pippa Middleton to be the godmother, and Prince Harry, the younger brother of Prince William, to be the godfather.

Keeping with British Royal tradition, Kate Middleton’s new baby girl will most likely have six godparents, and Prince William and Kate will get to choose from anyone they like… legally but perhaps not in practice! ABC News speculates that some of the friends in the running are William’s longtime friend, Thomas van Straubenzee.

We reported earlier that a source at the National Enquirer stated, “Kate would like her wild-child sister Pippa Middleton and troubled younger brother James Middleton to be her baby’s religious sponsors. But the image-conscious Queen feels Kate’s siblings are unsuitable, and wants the coveted roles for her son Prince Andrew and his 24-year-old Princess Beatrice…William is still very much under his grandmother’s thumb.”

Well, it appears that Queen Elizabeth may just have her way, and can we blame her? James Middleton is close to filing for bankruptcy, and according to the National Enquirer, he had to ask his family for money to dig himself out of the hole that he dug, and Pippa Middleton is known for her partying lifestyle including a near-arrest in Paris after a wild joyride during which her drunken companions brandished a gun, causing panic and police to be called!

Do you agree with Queen Elizabeth that Pippa Middleton is totally unsuitable as godmother to little child fourth in line to the throne or would you like to see Kate Middleton’s sister have that largely ceremonial role in the baby’s life? Let us know in the comments below.