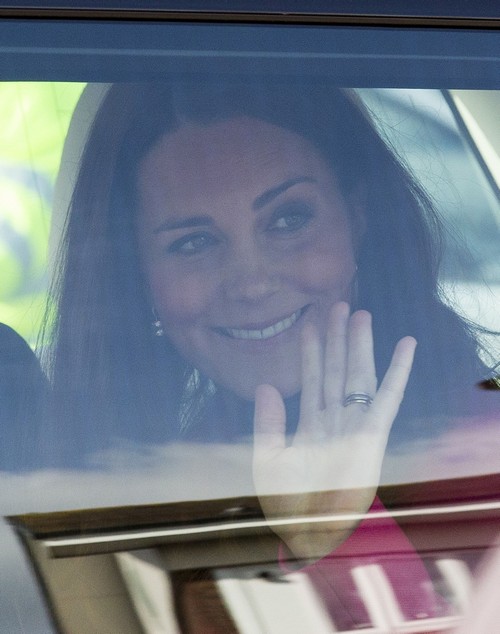 Kate Middleton is due to have her second child “mid to late April” and her rumored official due date of April 20 is drawing close. The Duchess of Cambridge is preparing to give birth as three hospitals are ready, which might suggest pregnancy complications, but Kensington Palace has several birthing plans set.

Princess Kate’s delivery of her second baby has been planned meticulously. According Hello magazine, the day The Duchess of Cambridge gives birth to first daughter or second son, will be similar to Kensington Palace’s birth plans for Prince George in 2013. However, there are a few slight changes…

Three hospitals are ready to deliver Kate Middleton and Prince William’s baby girl or boy. The primary choice location is the exclusive Lindo Wing of St Mary’s Hospital in Paddington where George was born. If complications in the plans arise, the Royal Berkshire Hospital and staff at Addenbrooke’s Hospital in Cambridge are also ready to care for Duchess Kate.

During her first pregnancy and delivery, Kensington Palace had contingency plans in place, but they were not as widely shared. This may hint at complications, but it’s more likely a location issue. If Kate Middleton is with her parents, Michael and Carole Middleton, and goes into labor at their Bucklebury home in Berkshire, it stands to reason why she will be whisked off the Royal Berkshire Hospital.

Another change the royals have made to their birth plan is privacy and the media. Reporters and photographers were allowed set up outside the hospital before Kate Middleton went into labor in July 2013. Now, thanks to the circus of Prince George’s birth, media is being restricted access.

You will still get the new of Prince William and Princess Kate’s baby. Kensington Palace’s Twitter and Instagram accounts will quickly spread the announcement of The Duchess’ admission to the hospital along with a press release. Another statement will follow after Kate Middleton delivers the new royal baby along with confirmation of the gender, time of birth, and weight. United Kingdom residents will also see the traditional notice outside Buckingham Palace.

The timing of the birth announcement will also be scheduled perfectly. If William and Kate’s second baby arrives after 10 p.m., the press will not get confirmation until 8 a.m. the following morning. Also, the couple’s families must be notified before the announcement goes to the press.

Are you excited for the announcement of the birth of the second child of Princes William and Kate Middleton? What do you think the tot’s name will be? Share your thoughts in the comment section below.