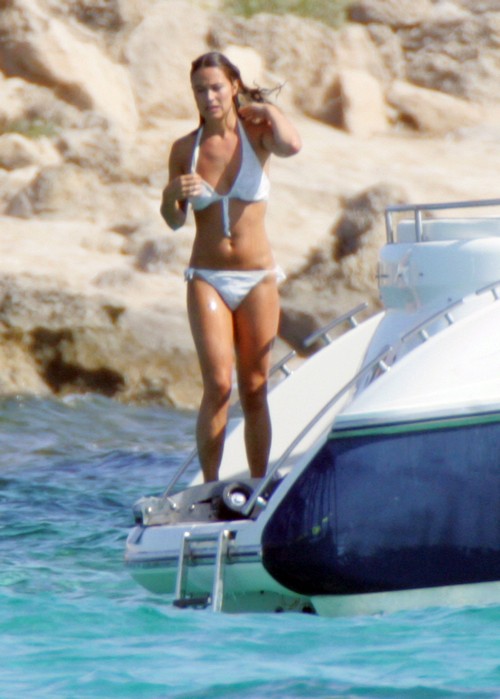 Kate Middleton struggles with sister Pippa Middleton always trying to use her royal connections to her advantage, often with inappropriate behavior designed to boost Pippa’s PR regardless of the consequences for her sister. Is Kate Middleton’s sister, Pippa Middleton, showing off her bikini body to gear up for a Hollywood career despite the fact the future Queen of England has asked Pippa to stay out of the limelight? Pippa Middleton’s always been fit, but has anyone seen her recent pictures during her royal holiday in Mustique? Her abs are insane, her muscles are insane, and Pippa’s clearly been putting a lot of effort into getting that perfect body. And surprise surprise, she’s taking the perfect opportunity to show it off while vacationing in Mustique. I think we all know that Pippa Middleton is willing to do anything for a little bit of fame, even if it means strategically posing for photographs while on vacation.

Look, Pippa’s attempts at earning an NBC news anchor position are still going strong, and she knows that the more the media covers her, the stronger her chances are. Despite the royal family’s internal turmoil concerning the Prince Andrew sex scandal, Pippa is going her merry way without a care in the world. In fact, don’t be surprised if she arranges for a ‘leak’ of a topless photo, even though the blame for such a photo would land solely on Kate Middleton. The entire family is on vacation together, but that doesn’t mean that Pippa is going to prioritize her needs above Kate Middleton’s and  the royals’ needs.

To Pippa, the number #1 priority is clearly landing that NBC talk show gig, or at the very least, increase her publicity so that she’ll land something worthwhile. She’s never made a secret of the fact that she’s riding her sister’s coattails into landing gigs and jobs, even above people that are much more qualified than her. And the thing is – Pippa knows exactly how to do it. Pippa Middleton wore a dress that stole the attention at Kate Middleton’s wedding, she arranges for the paparazzi to stumble by places she frequents, and she often knows how to capitalize on the media craze to improve her own publicity.

I mean, maybe Pippa Middleton is preparing for a career in Hollywood and is Kate Middelton upset? At this point, would that even surprise anyone? What do you guys think about Pippa Middleton showing off her bikini body to the world? Let us know your thoughts in the comments below.

Image Credit: FameFlynet Photos of the Middleton sisters and Prince William before marriage partying with friends in Ibiza (2011)