Kate Middleton and Prince William To Be Queen and King: Queen Elizabeth Pleads With Couple To Save Royal Family! (PHOTO) 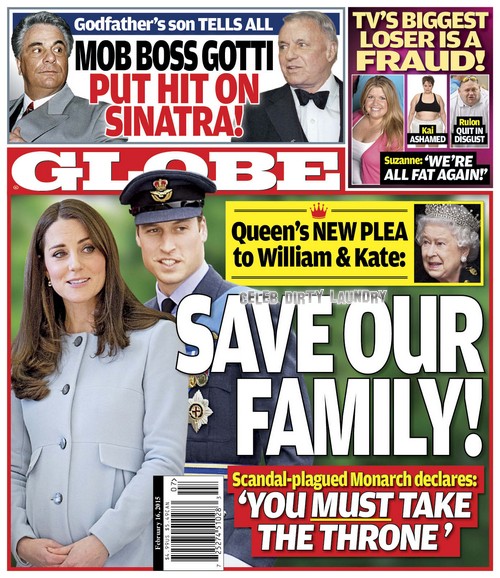 Kate Middleton and Prince William have been called in by Queen Elizabeth to take the throne and save the monarchy in the wake of the terrible scandals ruining the Royal Family. Queen Elizabeth’s Royal Family is crumbling as we speak, the ailing Queen of England has been dealing with back to back scandals for months now, and the Royal’s reputation is hanging on by a thread. Between Prince Andrew’s shocking teen sex slave scandal, Camilla Parker-Bowles falling off the wagon and boozing again, Prince Charles serious foot-in-mouth disorder and Kate Middleton threatening to walk out, baby bump and all – Queen Elizabeth is desperate. The Queen knows that she can’t step down form her throne with everything in disarray and hand the Royal reigns over to the incompetent Prince Charles and his despised wife Camilla Parker-Bowles, and that is why she is begging Prince William and Kate Middleton to step up and take the throne and assume the titles of King and Queen.

It’s no secret that Queen Elizabeth has been grooming Prince William and Kate Middleton to take the throne – however after Kate Middleton became pregnant with baby number two Prince William shocked his ailing grandmother by informing her that he wanted to be a family man, and passed on the Royal responsibilities. According to a new report from GLOBE Magazine, Queen Elizabeth is now pleading with her grandson to become the next King of England as she knows that if Prince Charles and Camilla Parker-Bowles step in, the scandals will only grow worse. Our friends at GLOBE always have the inside information on the Royal Family. The February 16th cover of GLOBE  magazine reveals, “Queen’s New Plea To William And Kate: Save Our Family. Scandal-Plagued Monarch Declares ‘You Must Take The Throne’.”

In other GLOBE news, this week’s cover of the magazine also teases an exciting expose on NBC’s popular reality TV show The Biggest Loser. Apparently the reporters at GLOBE have done some digging, and it is all a scam! The majority of the contestants from previous seasons of The Biggest Loser have packed back on the pounds. Also for you Mafia junkies, there is a piece on mob boss John Gotti, who apparently at one point tried to take out a hit on Frank Sinatra!

So, do you think that Prince William and Kate Middleton will be able to save the Royal Family, or is it beyond repair? Will Prince William step up to the throne and take one for the team, or will he stick to his original decision and become a “family man” and stay home with pregnant Kate Middleton and their son Prince George? We will be running out and grabbing a copy of this week’s GLOBE as soon as it hits the newsstands so we can dish on all of the latest Royal Family gossip!