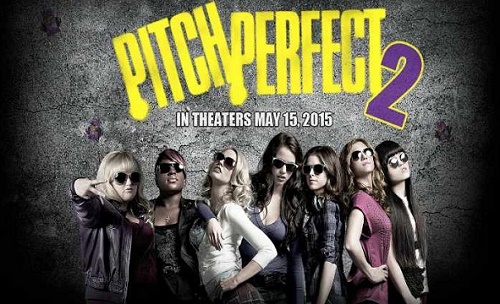 Hands in, aca-people! The heavily anticipated sequel to ‘Pitch Perfect’ topped the box office this past weekend at number 1 with $70.3 million, surpassing both ‘Mad Max: Fury Road’ at $44.4 million and ‘Avengers: Age of Ultron’ at $38.8 million. The success of ‘Pith Perfect 2’ should come as no surprise given the massive success of the first film, which garnered a huge fan base, not to mention skyrocketed the careers of its supremely talented stars, including the Oscar nominated dynamo Anna Kendrick, whose surprise hit from the first film landed her at number 6 on the Billboard Hot 100!

The sequel brings back the first film’s favorite stars including Anna Kendrick, Rebel Wilson, Skylar Aston, and Brittany Snow, whose character Chloe failed three years in a row just so she could continue singing with the Bellas! While most sequels fail to measure up to its first installment, ‘Pitch Perfect 2’ does not disappoint. With more than 60 songs featured in the film and even more show-stopping numbers (including a supersized riff-off!) fans of the first film have a lot to look forward to in the sequel!

When asked about the possibility of a ‘Pitch Perfect 3’ director Elizabeth Banks said, “I will say, it would be disingenuous to say that no one’s talking about a Pitch Perfect 3; the possibility of it. We are really focused on getting as many butts in seats for this one. If fans embrace it, we are going to seriously think about what the continuing journey would look like, but we don’t know what that is yet.”

Judging by the success that ‘Pitch Perfect 2’ has seen in its opening weekend alone, it seems pretty clear that fans would eagerly embrace a third movie!

Would you be excited to see a ‘Pitch Perfect 3’ happen? Let us know in the comments below!