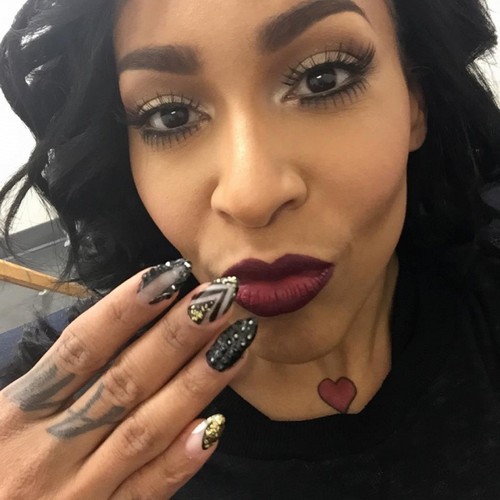 More details in the Love & Hip Hop: New York cheating shocker have been revealed and now we know that pregnant Tara Wallace moved into the same NYC apartment building as Peter Gunz and Amina Buddafly. The new living arrangements were revealed in an extended promo for the popular VH1 reality show on Monday, December 7.

Gunz is seen getting up out of a bed on the floor. As the scene progresses, we see that Peter Gunz has a woman in bed with him and when she turns over, we find out that it’s none other than Tara Wallace.

Well we knew they never stopped sleeping together even after Gunz got married because they were together at Yandy Smith and Mendeecees Harris’ wedding in May.

In the LHHNY promo clip, while Peter is getting dressed, it is revealed that Wallace moved herself and two young boys closer to Gunz in an attempt (or so they claim) to give the kids more time with their dad.

What they don’t mention is that Tara moved into the same building as Peter Gunz and his wife Amina Buddafly. Gunz and Wallace tried to be coy about their new neighbor status, referring to Tara’s new place as being “across the way.”

What Peter should have said was that his paycheck chaser lives down the hall. As Peter is seen leaving the side chick’s home and then making his way to the apartment he shares with Amina, it is literally a short walk down a hallway and an elevator ride.

The hallway walls and even the hallway lights right outside Tara’s apartment are a perfect match to those seen as Gunz turns the doorknob to enter his own home. Not to mention that we see Peter’s long walk home via the VH1 camera crew and they never show the Deja Vu rapper leave one building and enter the next or go outside at all.

When Gunz walks into his own apartment after his tryst with Tara, Amina is seen giving her husband a hateful look. Obviously Amina is not okay with the current love triangle situation but she’s let it go on this long. Now Tara Wallace is pregnant with another of Gunz’ kids while he jumps back and forth between both women. We’re not sure who looks worse, Tara or Amina.

In the extended clip for the season 6 premiere of Love & Hip Hop: New York, Peter tried to rationalize his low down behavior by saying that he is basically sleeping on the couch now. The Bronx rapper claimed to be co-parenting with Amina Buddafly now but not much more.

Let’s be real for a second though, Tara has been letting Peter run back and forth between her and several woman so really they have just made the set up a little more convenient for the promiscuous rapper.