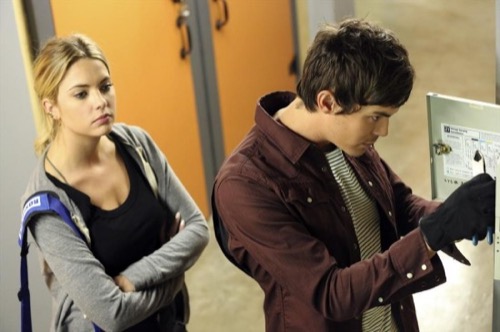 Pretty Little Liars returns to ABC Family tonight with an all new Tuesday January 27, season 5 episode 17 called “The Bin of Sin,” and we have your recap below. Tonight “A” wants to frame Hanna [Ashley Benson] for Mona’s [Janel Parrish] murder, so Hanna’s pals devise a plan to get her out of trouble, but Hanna refuses to take the easy way out. Meanwhile, Aria makes an admission to Ezra [Ian Harding] ; and Spencer’s behavior causes problems for Toby at work.

On the last episode, secrets were hard to keep, especially when was keeping them from a loved one. Spencer searched for Mona’s missing laptop with Caleb’s help but where the search lead them crossed the “Toby approved” line. Aria tried to get up the courage to come clean to Ezra about her lie when she got diverted by a possible goose chase. And Hanna was stuck in the middle having to cover Ashley’s secret when Pastor Ted returned with big news. Did you watch last week’s episode? If you missed it we have a full and detailed recap right here for you.

On tonight’s episode as per the ABC Family synopsis, “suspecting that Alison/”A” is out to frame her for Mona’s murder, Hanna is not willing to just sit by and let it happen. When Caleb and her friends try to come up with a safe plan to get Hanna off the hook, it isn’t good enough for her. Taking her fate into her own hands, Hanna strikes out alone to clear her name. Meanwhile, relationships are tested when Aria comes clean to Ezra and Spencer’s shady actions continue to put Toby in a bind at work.”

The seventeenth episode of season five’s PRETTY LITTLE LIARS is going to be really exciting and we’ll be recapping it for you right here. While you wait for the recap, check out a sneak peek of tonight’s episode below!

Tonight’s episode of Pretty Little Liars kicks off with Toby and Hanna filling the liars in on their latest discovery – the storage locker is in Hanna’s name. Hanna and Toby want to go to the storage locker and get rid of all of the evidence and the barrel that they think has Mona’s remains in it. They shoot down their plan, and Caleb says that he can fix it and can hack in to the storage locker’s computer system and change the name on it so that they can’t trace it back to Hanna. Then they will tell Detective Tanner about the locker and Mona’s laptop. Hanna storms out and is not a fan of the plan.

The next morning Aria heads to the coffee shop, Emily tells her that she didn’t sleep all night and was up thinking about the storage locker. Aria can’t find Ezra so she leaves. The other chef Thalia arrives in the kitchen with a pie that she made for Ezra – Emily informs her that Ezra is dating one of her friend so she should back off.

At Hanna’s house, her mom comes downstairs to get ready for work. She talked to Ted, and apologized for freaking out on him – but she didn’t tell him about her hook-up with Jason. Ashley reveals that she is going to keep Jason a secret from him, Hanna thinks it is a horrible idea and Ted deserves the truth. Ashley snaps at her to “forget it ever happened,” and leaves for work.

At the Rosewood police station, Toby is going over Alison DiLaurentis’s file. Spencer arrives and says that she needs to talk to him in private. Toby whispers to her that she was supposed to stop whatever she and Caleb are up to – Detective Tanner interrupts and wants to know why Spencer isn’t at school. Spencer rushes off, and Toby tells Tanner that he thinks Holbrook faked Alison’s polygraph test and people saw him kissing her at the dance. Tanner flips out on him and tells him that if he wants to keep his job he should stop investigating his superior officer.

Aria finally sees Ezra – and tells him that she got accepted to Talmadge. He is thrilled, and says that they will celebrate later. She confesses to Ezra that she wrote a letter to the admissions board saying she wished she never dated him and that was why Jackie let her in, she gives him a copy of the letter. Caleb stops by Hanna’s house and says that he erased the files at the storage locker unit. Hanna lets him in and he sees that her kitchen is full of rubber gloves and bleach. Caleb warns her that there is no way they can get in to the locker without getting caught. Hanna whines that her DNA could be in the locker and she has no choice – he caves and agrees to help her.

Ezra finishes reading the letter, and Aria apologizes profusely. He interrupts her and says that he isn’t angry and it was a brilliant move, she did what she had to do to get in to college. Ezra insists that he doesn’t care what Jackie thinks about their relationship, he hugs Aria – but it is obvious that he does care.

Ashley and Jason go out to lunch and she gives him all of the paperwork he needs to finish running the business – she is quitting. Jason insists that she doesn’t have ot leave because they slept together. Ashley reveals that she is in a serious relationship with Ted and he proposed, so it won’t be right for her to keep working for her. Jason tells her that he understands, and to swing by the office later and pick up the rest of her stuff.

Hanna and Caleb arrive at the storage locker, and he disconnects the security cameras while Hanna breaks in to the locker. Meanwhile, Spencer tracks down Emily and Aria in a panic – she got an alert on her phone that someone is moving Mona’s laptop. They think that Hanna went to the locker after they told her not to, they jump in Spencer’s car and follow the laptop’s GPS signal. Meanwhile, Hanna and Caleb get inside the locker and it has been completely emptied. All that is left inside is the barrel that they think has Mona’s body in it.

Spencer, Aria, and Emily arrive at an old ice cream factory where the GPS said Mona’s laptop was. They still think that they are tracking Hanna and Caleb. They decide to split up so that they can find the laptop, they don’t have cell phone service. Meanwhile, at the storage unit Detective Tanner and Toby arrive and catch Hanna and Caleb. Caleb lies and says that they are looking for a unit to rent and he and Hanna rush out.

At the factory Spencer hears Hanna and Caleb’s voices – she follows them and finds a laptop playing video footage of them at Hanna’s house planning to break in to the storage unit. Aria and Spencer realize that whoever is in the factory is not Hanna and Caleb. Someone dressed in black lockers them in the room and turns on the freezer and they begin panicking as the temperature drops. Emily hears them screaming and races downstairs and begins smashing the glass trying to get them out before they freeze to death. At the storage unit Tanner and Toby open the barrel, and the liquid inside stinks – Tanner tells Toby to go call back-up with a hazmat suit.

Back in Rosewood, Ashley heads to the office and picks up all of her stuff from the office. She chats with Jason about her relationship with Ted and he walks her out to her car – then he kisses her. Ashley pulls away and tells him that it can never happen again and runs to her car and leaves.

Emily receives a text from Hanna telling her that Tanner and Toby went to the storage locker, she panics and races out of work.

After her traumatic time in the freezer, Aria heads over to Ezra’s for a romantic dinner. Ezra reveals that the letter really did bother him, he thinks that they should break up because he doesn’t want to hold Aria back. She insists that she can live her life and still be with him. Ezra tells her to take some time for herself, that way she doesn’t resent him later on.

Hanna arrives at Spencer’s house and accuses her of telling Toby where the storage locker was. Spencer insists that she didn’t tell him – and Hanna snaps that if Toby was their friend, he would have warned them. Hanna storms out and Spencer calls Toby at work – he ignores her call and Tanner lectures him that if there is anything she should know he has to come clean now!

Aria heads home and looks through a Rosewood High yearbook, she realizes that under his picture she doesn’t have any clubs or activities listed like her friends. Ashley sits at home alone, drinking wine, and examining the new engagement ring on her finger. Toby calls Spencer and she demands to know what was in the barrel – he refuses to tell her and says that he can’t come over later because he is busy. Spencer cries as he hands up on her.