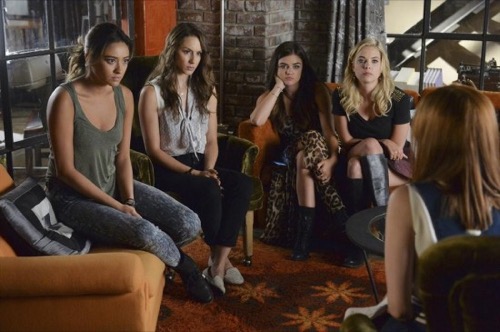 On the last episode, suspecting that Alison “A” was out to frame her for Mona’s murder Hanna was not willing to just sit by and let it happen. When Caleb and her friends tried to come up with a safe plan to get Hanna off the hook, it wasn’t good enough for her. Taking her fate into her own hands, Hanna struck out alone to clear her name. Meanwhile, relationships were tested when Aria came clean to Ezra and Spencer’s shady actions continued to put Toby in a bind at work. Did you watch last week’s episode? If you missed it we have a full and detailed recap right here for you.

On tonight’s episode as per the ABC Family synopsis, “Aria, Emily, Hanna and Spencer have been burned before by newcomers to Rosewood, so it’s no surprise the four ladies are wary when someone new crosses their path. Spencer lets down her guard a bit as she spends more time with Jonny, and Emily continues to try and figure out Talia as she keeps getting mixed signals from her co-workers. When Mona’s friend Lesli shows up in town, Hanna is tasked to get her back story and find out if Lesli is really who she says she is. Are the girls wise to keep an eye on everyone, or can they allow a bit of comfort room without worrying it is an “A” trap?”

The eighteenth episode of season five’s PRETTY LITTLE LIARS is going to be really exciting and we’ll be recapping it for you right here.

Tonight’s episode of Pretty Little Liars begins with Spencer, Aria, and Emily chatting outside of the café. Spencer dishes on her relationship with Toby, she thinks that she is tearing him apart. They spot Aria’s mom standing outside of the police station with Ali’s defense team – apparently her mom is working with them as a consultant. Spencer reveals that her mom took the job because she wants to know what they know – like whether or not they will get called to testify when Ali goes to court.

Spencer runs off to talk to Hanna, she begs her to “let her fix” their fight. Hanna tells her to stop, she knows now that Spencer was right. She apologizes for panicking and trying to get the things out of the storage locker. While they are talking they see Holbrook pull up to the police station. They don’t understand what he is doing back here after all of this time – he stops and talks to Spencer’s mom.

The liars head inside the café to discuss Holbrook, they think he is “A” and is doing Ali’s dirty work while she is in jail. They are afraid that the closer they get to Ali’s trial, the more dangerous and desperate Ali and Holbrook are going to get. Spencer spots her new neighbor at the coffee shop, apparently Ezra hired him to build something for the café. He asks Spencer if she wants to help him – but she says that she is busy.

Emily heads inside and sees the chef that Ezra hired, she asks her why she didn’t come to work yesterday. She says that she wasn’t sick, she just “had to take care of something.” Meanwhile, Hanna, Spencer and Aria are panicking – apparently the police called Caleb about being at the storage unit. A girl shows up at the café named Leslie and says she wants to talk to Hanna – apparently she was friends with Mona. Leslie sits down with the liars and reveals that she met Mona a couple of summers ago at her grandparent’s house. She is in town for the weekend to support Mona’s mom, since Alison’s trial is coming up. She just wanted to meet them and thank them for taking care of Mona’s mom when she was killed.

Spencer isn’t buying it – she thinks Leslie is a fraud. Spencer tells her to go talk to Mona’s mom and see if she is the real deal after she goes to the police station. Spencer gets off the phone and sees her mom’s briefcase lying on the counter, she opens it and snaps a few photos of the files inside about Alison’s case. Spencer’s mom comes inside – and Spencer tries to ask her about Holbrooke. Her mom doesn’t want to discuss it though – she wants to discuss college. She found all of Spencer’s acceptance letters that she threw away. Spencer explains that she isn’t sure she wants to go to college anymore – her mom snaps on her and says not going to college is not an option.

Hanna and Caleb are sitting at the police station waiting to be interviewed, Hanna’s mom is on the way. Hanna whines that she is scared the cops have videos of them at the storage locker. They hear arguing – and Holbrooke storms out of an office and starts slamming his desk around. He grabs a box of his office and stomps out of the police station.

Spencer pays Aria a visit – she reveals that she saw a copy of Alison’s visitor log in her mom’s file. She shows Aria a picture of the file, and reveals that her own brother Mike Montgomery has been going to the prison to visit Alison. Hanna heads to the café and tells Emily that Holbrooke got suspended form the police force for “inappropriate conduct.” Hanna leaves, and Emily calls Aria and Spencer to tell them about Holbrooke.

Hanna heads to Mona’s house, and the girl Leslie is there in her room. Hanna tells Leslie that if she “really knew Mona” she would know that their friendships were much more complicated than just going to the mall. Leslie says she knows about the “real Mona,” and that was what she liked about her – she was always thinking. Hanna has a flashback of Mona sitting in her room reading her an excerpt out of a horror book. Mona tells Hanna that she has three wishes – and asks her what she would wish for. Hanna won’t make any wishes, but Mona wishes she could stop time and freeze it so that she could control people.

Hanna and Leslie head to the brew, Leslie is carrying a book from inside of Mona’s room. Mike sees them walk in and spots the book – he freaks out on them and gets a little violent. He yells that they can’t just take Mona’s stuff out of her room, Hanna tries to calm him down and reassures him that they will put the book back. After Mike stalks off Leslie reveals to Hanna that she was talking to Mona right before she was killed on the phone – and an angry guy screamed at her to “Get off the phone and talk to him.” Hanna is shocked when Leslie insists that the guy was Mike.

Hanna visits Arian and is annoyed when Aria says she still didn’t ask Mike about visiting Alison in prison. Hanna fills Aria is on what Leslie said. Meanwhile, inside the café Spencer is visiting her neighbor – he is still working on his project, and still won’t tell her what it is. She picks up his diagram, and realizes that he drew it on the back of Alison DiLaurentis’s missing poster. He is intrigued by Ali, he says she has a nice smile, he asks How do you go from that – to sitting in jail for killing someone?”

Back at Mona’s house, Hanna has another flashback. She and Mona are lying in bed together, she asks Mona if Alison came back in disguise – would they be able to recognize her. Mona snaps that even if Alison does come back, no one would recognize her or care about her – so Alison would go crazy and snap and wind up in Radley forever. Hanna picks up the book that Mike flipped out over and realizes that it is not just a book – she pulls on the binding and a cassette tape falls out. Hanna rushes to her car and takes the tape with her, little does she know someone is following her.

Aria is sitting at home in her room, and she hears a noise – it’s Mike getting ready to leave, she decides to follow him. Hanna meets up with Caleb and they play the tape – its from Radley. It’s Bethany Young ranting about Alison DiLaurentis. They decide to play the tape from the beginning.

Aria follows Mike down to a pond, he is standing on the dock in the dark. He takes something out of his pocket – and then leaves it on the dock and walks away. Aria sneaks out to the dock after he leaves to investigate. It’s just a Ziploc bag full of gumdrops – she turns to leave and Mike is standing there, she is totally busted. Mike demands to know why Aria followed her, Aria demands to know why he has been visiting Alison in jail. She yells at him not to go back there again. Mike snaps on her and says he isn’t taking orders from anyone – he sneers “be careful going home through the woods,” and storms off.

At home Spencer’s mom receives a phone call from one of Alison’s lawyers. She explains to Spencer that there has been a leak from the prosecutor’s office. They were tracing the drops of blood they found on the floor at the storage locker – and it is not Mona’s blood, it is Alison’s.

Hanna is driving home in the dark and she gets pulled over by a cop – it’s Holrbooke. He grabs her by her arm when she gets out of the car. She demands to know why he is pulling her over. Holbrooke sneers at her, “how does a girl like Alison become a girl like Alison? I’m finished because of her.” Hanna accuses him of doing Alison’s dirty work. Holbrooke says that Alison cut her off and he was locked in a hotel room the last few days with someone from internal affairs. He tries to kiss Hanna, and she hits him with a tire iron and hops back in her car and leaves.

While Emily is at the brew making out with the new chef that Ezra hired, Hanna fills Spencer and Aria in on her meeting with Holbrooke. She explains that there is no way that Holbrooke was helping Alison. Spencer and Hanna think that Mike is the guy that has been helping Alison. Aria says it is not possible – and insists that Mike won’t visit Alison again because she told him not to.

Meanwhile, Mike is doing just that – and signing in to the prison to see Alison. The episode ends with someone dressed in black going through Mona’s room.