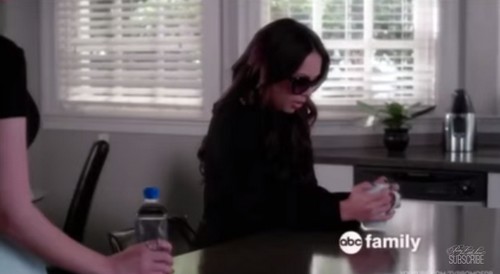 Pretty Little Liars Season 6 Episode 5 spoilers tease that “She’s No Angel” will air on ABC Family on Tuesday June 30. Last week on PLL we learned that Jason and Alison have another sibling named Charles who was sent away to Radley Sanitarium, and committed suicide when he was 16 years old. Spoilers indicate that on Episode 5 the liars will continue to search for clues as to “A”’s real identity, and all signs point back to Radley where Charles was living.

An all new Pretty Little Liars spoiler video for “She’s No Angel” teases that PLL fans are in for a treat during Episode 5. The promo features the liars searching Radley for clues to “A”’s identity, and it looks like their frienemy Jenna Marshall is back – perhaps she has one of the missing pieces to the puzzle? Spoilers also indicate that Janel Parrish will return to the ABC Family drama on Tuesday June 30 as Mona Vanderwaal.

“A” will be back with a vengeance in Season 6 Episode 5, and the Pretty Little Liars spoiler video also features a frantic Sara Harvey telling the liars that someone in a black hoodie has been following her. As always, whenever the liars get closer to the truth – “A” ups the ante and becomes more dangerous.

The Pretty Little Liars Season 6 Episode 5 official synopsis also reveals: “Emily tries to help Sara with her troubled home life by encouraging her to explore the possibility of emancipation. Spencer, on the other hand, finds help from someone from her past. Alison grows closer to Lorenzo as she looks for support outside of her family.”

So PLL fans, do you think that Charles is really dead? Or has someone that was locked up in Radley with Charles assumed his identity? Let us know what you think in the comments below and don’t forget to check CDL for all of your Pretty Little Liars spoilers and recaps!