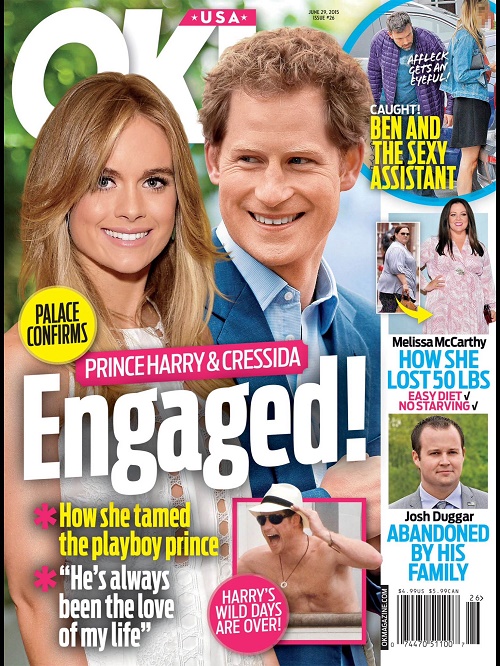 The June 29 cover of OK! Magazine features a photo of Harry and Cressida and the headline reads: “Prince Harry and Cressida Engaged!” The cover goes on to tease that the engagement has been “confirmed by the palace,” which we all know is a blatant lie. The Palace does not comment on any rumors, let alone give American tabloids the time of day. And, apparently, OK! Magazine has inside details on how Cressida “tamed Harry,” and his “wild days are over.” Right, what did she do? Ship him off to obedience school? He’s a Prince of England, not a Labrador puppy.

OK! Magazine’s inside sources go on to say that, “They rekindled their relationship in March. They were determined to keep it to themselves for as long as possible so that they could have some privacy while they were getting used to each other again. They have never been happier together. Cressida says that he is the love of her life.” So, if Harry and Cressida have been together since March, then what was the Prince doing hitting on Jennifer Lawrence and canoodling with Dr. Who star Jenna Coleman at a charity event?

The odds of Prince Harry getting married anytime soon are slim to none, and the odds of him marrying Cressida Bonas when he does get married are even slimmer. Do you think there is still hope for Harry and Cressida? Or are you as tired of the tabloids trying to reunite the former couple as we are? Let us know what you think in the comments below!