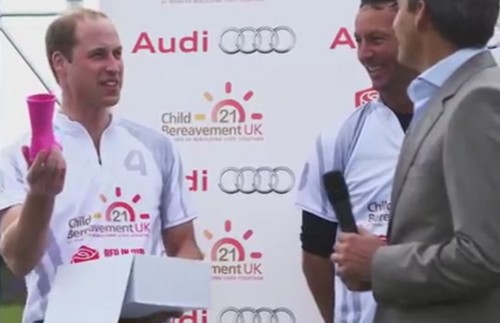 Prince William’s wife Kate Middleton is still hiding away at Amner Hall dieting like a mad woman, taking care of Princess Charlotte, and trying to keep the peace between her live-in mother Carole Middleton and Queen Elizabeth. Prince William isn’t losing any sleep, despite being the father of a newborn baby and a toddle, the Duke attended an event on Sunday May 31 looking bright-eyed and bushy-tailed with his brother Prince Harry, without a care in the world.

Prince William left Kate Middleton home to fend for herself with two children under the age of two and her mother Carole Middleton’s drama, and he headed out with Prince Harry to the Audi Polo Challenge at Coworth Park. The event is an annual summer extravaganza in Britain, and more than three leading charities benefit from the Audi Polo Challenge: Child Bereavement UK, RFU Injured Players Foundation and Sentebale.

Of course, Prince William had to attend – it was for a good cause, actually three good causes. But, he probably could have just made an appearance. Instead Will and Harry partied the day away at Audi Polo Challenge after-party, which included a concert from John Newman. Prince Harry and Prince William spent the afternoon schmoozing and boozing with an impressive list of celebrities which included: Chris Hemsworth, Clive Owen, Emily Blunt, and Stanley Tucci.

There is no doubt in our minds that Kate Middleton is getting is getting restless being cooped up at Amner Hall with Prince Charlotte and Prince George while her husband gets to rub elbows with some major celebrities like Chris Hemsworth. Prince William seems to be following a similar pattern, a few weeks after Prince George was born – he left Kate Middleton on her own to care for the now toddler and the Duke came and went as he pleased. It looks like the novelty of having a new baby girl has worn off, and Prince William is ready to get back to doing what he wants to do.

Do you think that it was wrong of Prince William to spend the entire day at the event and after-party when Kate Middleton was stuck home with the kids, and her over-bearing mother Carole Middleton? Or did Kate tell Prince William to go ahead without her and have a good time – there is no reason they should both be on baby lockdown? Let us know what you think in the comments below!