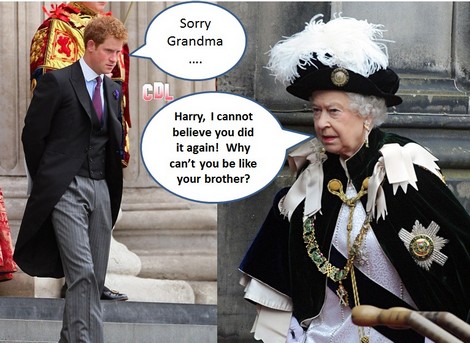 Prince Harry has been on his best behavior – so it’s about time for him to get caught up in another scandal or two and completely mortify the Royal Family and be dubbed a disgrace by Queen Elizabeth. This month Prince Harry got caught up in not one, but two different drug-related scandals, and National Enquirer has all of the details in this week’s edition of the magazine.

First and foremost, The National Enquirer has some pretty suspicious looking photographs of Prince Harry passing what appears to be a joint around with another guy and gal. One could argue that it was just a cigarette made of tobacco – but seriously why would the Prince of England be rolling his own cigarettes.

Secondly, if you are rolling your own cigarettes – why would you share one cigarette with two other people if all that was inside of it was tobacco? There’s plenty to go around – he could have just rolled them their own cigarettes rather than sharing one between three people.

The alleged marijuana photos are the least of Prince Harry’s worries at the moment though. Queen Elizabeth is fuming because one of Harry’s close friends was just linked to a multi million dollar international cocaine smuggling ring.

According to National Enquirer, Harry’s party pal Fidelio Cavelli is under investigation for conspiring to smuggle hundreds of millions of dollars worth of cocaine with his private jet. Seeing as how Cavelli and Harry are close pals, and have even vacationed together, the scandal is not shedding a good light on the Palace.

Queen Elizabeth is up in arms over Prince Harry’s drug scandals this month. An insider close to the Royal Family dished to the magazine, “The Queen is frantic and embarrassed. Her Majesty is furious that Harry is close friends with people who are linked to drugs, and she has ordered a full review of her grandson’s inner circle.”

Of course, Queen Elizabeth is not the only unhappy camper in the Palace right now. National Enquirer goes on to say that “Prince Charles is on the warpath,” and he blames their security detail for not keeping his wild son out of trouble.

At this point, it is what it is – the only people who are still shocked by Prince Harry’s behavior are the Queen and Charles, the people have all come to accept him just the way that he is. Do you think that Prince Harry had anything to do with the cocaine smuggling ring? Or is the Queen overreacting? Share your thoughts in the comments below!