Kate Middleton Smiles At Princess Beatrice’s Jealous Plot: Plans To Be “The Kim Kardashian of the Royal Family?” 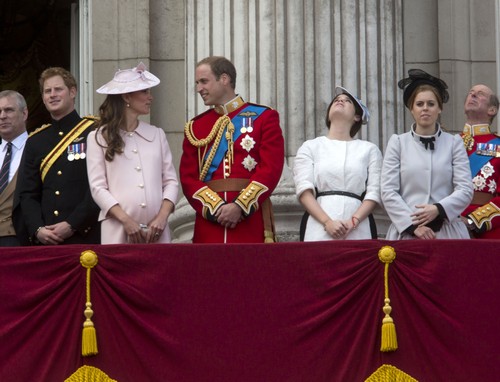 Is Princess Beatrice so jealous of Kate Middleton that she wishes to become the “Kim Kardashian of the Royal Family?” Certainly Kate Middleton laughs at such petty nastiness and insecurity on the part of her rival? We almost always see The Duchess of Cambridge smiling in public and while some outlets insist it’s because she is ordered to by Queen Elizabeth, sources tell CDL that it’s due to amusement at Prince William’s jealous cousins!

Hundreds of thousands of women envy the glamorous life of Prince William’s pregnant wife Kate Middleton – and apparently so does the Duchess of York Sarah Ferguson’s daughter Princess Beatrice. Prince Charles’s niece Beatrice has apparently been walking in her Aunt Camilla Parker-Bowles’ footsteps when it comes to envying Kate Middleton and her legions of loyal followers. Fergie’s daughter Princess Beatrice is just as much a Princess as Kate Middleton (even more so since Beatrice is a born royal, not a social climbing commoner like Waity Katie), but has been put on the backburner for many years, and any media presence she did have, has dissolved since Kate Middleton married in to the Royal Family.

According to the January 19th edition of Star Magazine, jealous Bea is determined to get back in the public eye, by any means necessary. One of Star’s Royal Family insiders reveals, “Beatrice is sick of Kate being the center of attention. As far as Bea is concerned she is younger and prettier than Kate! Bea has got a lot of sexy outfits lined up for the next few weeks. And she’s got a trip to the Caribbean planned with her longtime boyfriend, Dave Clark. She thinks that a few skimpy bikinis and making out in the turf will get her the attention that she has been craving.” The tabloid goes on to say that Princess Beatrice wants to create some Royal scandal and become the “Kim Kardashian on the Royal Family.”

Ironically, Princess Beatrice’s mother Sarah Ferguson – was always in the press when she was younger because of her divorce and affairs. All Bea has to do is follow in her mother’s footsteps and she should have no problem drumming up some scandal and press coverage. As far as becoming the “Kim Kardashian of the Royal Family,” Princess Beatrice is going to do a whole lot more than wear a couple of bikinis and kiss her boyfriend in public to gain that title.