Kate Middleton and Prince William as Next Queen and King – Queen Elizabeth Struggles With Choice? 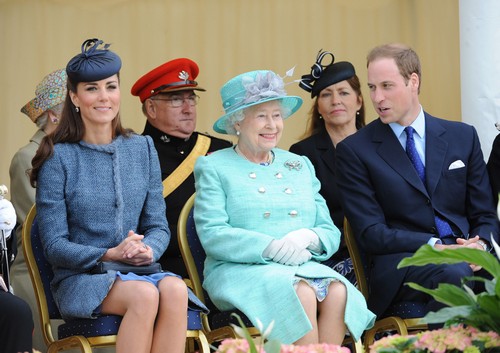 Will Kate Middleton and Prince William ascend the throne after Queen Elizabeth or has the monarch decided to keep Prince Charles and Camilla Parker-Bowles as next King and Queen? It seems like the old girl has got same game in her yet. Queen Elizabeth has been making and breaking promises about abdicating the throne and handing down her crown to a successor, according to GLOBE. GLOBE cited the Queen was influenced by a poll of UK citizens showing the majority prefer to see Prince William on the throne over acknowledged adulterer Prince Charles.

Queen Elizabeth approached Prince William, according to sources, and discussed a transition of the crown from her silver pate to his nearly hairless one. But now, the tabloid says QEII has reportedly reversed course and is now reconsidering her eldest son instead. It’s all down to a report, apparently, that assessed Kate Middleton and Prince William’s ability to rule effectively.

The royal report opined that Kate Middleton and Prince William are too young and the public feels they should focus on parenting – not the royal seat. Plus, Kate Middleton has been a royal for a scant amount of time, particularly when you compare it to the length of experience Queen Elizabeth possesses. She took the crown at 26 while Kate and William are already 33.

Plus the Queen had a four and two year old when she was inducted as Queen, not that much different from Kate Middleton and Prince William. Plus, lest we forget, how much power does the Queen (or future King) really wield? In fact, the royal personage on the throne in England cannot make law but does have the power to veto legislation should they so choose. Of course no British monarch would even consider a royal veto (if they want to stay living in Buckingham Palace) so the signing into law of legislation is purely a formal responsibility.

Queen Elizabeth does not even have the legal power to decide whom to pass her crown on to, but there she can wield great influence. Prince Philip is encouraging his wife to retain the crown a while longer to give Prince William and Kate Middleton the chance to mature into the responsibility.

Camilla would much rather have the mantle of queen on her head than Kate Middleton’s and she’s hoping this will give her time to manipulate Prince Charles into fighting for the crown. But surely if Queen Elizabeth is reviewing polling data, she’s also checking the public pulse about the notion of Queen Camilla.

The UK’s Daily Mail reported a few months back poll results showing 55% of Britons didn’t want Camilla on the throne. The Duchess is, after all, still viewed as the villain in the divorce of Princess Diana and Princess Charles which one could argue ultimately led to the death of the people’s princess in a place she would not have been had she still been wed to Prince Charles.

Now more than ever, the phrase “long live the Queen” is apt – better Queen Elizabeth on the throne for a while longer than Camilla ever!