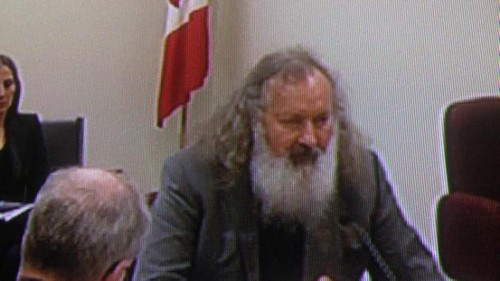 American actor Randy Quaid has just been released from custody in Laval Quebec on a $10,000 bond, after his arrest last week in Montreal. The Canadian Immigration and Refugee Board made the announcement early Tuesday morning, May 19. Randy Quaid was being held at a detention center in Laval, Quebec for being an illegal immigrant.

A warrant for Quaid’s arrest was issued back in January 2013 after he did not show up for an IRB interview. Quaid, who looks nothing like himself now that he is covered in a full beard and long hair, appeared before the immigration board on May 19 in Montreal.

Quaid and his wife Evi first sought refugee status back in 2010 after they made claims that they were being persecuted in the United States. They went on to allege that they were targets of the group called the “Hollywood star-whackers,” a group whose mission was to kill Hollywood A Listers.

Evi’s father was born in Canada, and she was granted her Canadian citizenship back in 2012, so, in turn, she should have been the sponsor for her husband, Randy Quaid’s, immigration application.

After seeking refugee status, randy withdrew his claim and instead applied for permanent residency in Canada. Unfortunately for Quaid, he was denied in 2012 because he was found guilty of degrading an innkeeper when he stayed in California. This is a criminal offense in Canada, therefore he was not granted his Canadian citizenship.

Quaid kind of fell off the map after this but when he and his wife were discovered living together in Montreal since February 2013 on Thursday, May 14, he was taken into custody.

During the hearing, Quaid made it clear that he was upset about the decision not to grant him residency in Canada, and that he needed to clear his mind, so he and his wife can live together in Montreal. He promised that he was ready to cooperate going forward and that he would do anything to be granted permanent residency.

He said, “At this point, I desire nothing more than to fully co-operate with any restrictions or conditions, as long as I could be with my wife, even if that means going back to the States to reapply for permanent residency status in Canada.”

Like we said, Quaid was released early on $10,000 bond, but is technically still under a removal order and could be kicked out of Canada and sent back to the United States at any time. That’s what you get for trying to cheat the system.

What do you think about this whole situation? Let us know in the comments below.