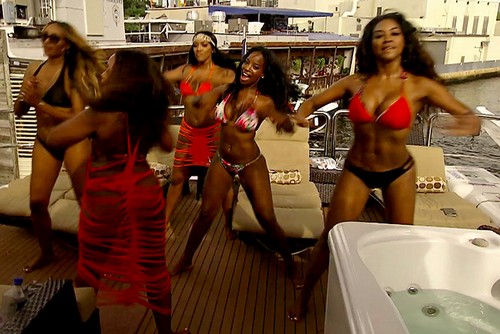 “Real Housewives of Atlanta” spoilers are in; season 8 promo reveals the show has taken the drama up a few notches – at least. The biggest reveal was that Nene Leakes and Claudia Jordan are no longer a Georgia peaches. Kim Fields, Sheree’ Whitfield, and Shamea Morton are part of the reoccurring cast. Bravo TV kicks off “RHOA” season 8 on November 8 at 8 p.m., with this cast, one thing you can depend on is drama – and lots of it.

The season opens with Kandi Burruss and Todd Tucker expecting their first child together. The show will follow her in her journey to motherhood- complete with prenatal appointments and ultrasounds. Kenya Moore is still looking for love and embarking on a new business venture. Cynthia Bailey is facing marital problems with allegations that her husband. Peter Thomas is cheating on her. Phaedra Parks is doing the best she can to cope with life as a single mother with Apollo Nida behind bars. Porsha Stewart seems to be in a happier place with a new man in her life and had her eyes set on becoming a mother.

Phaedra told Cynthia that she spoke to Apollo every day on the phone. After Peter (Cynthia’s husband) talked to Apollo, he learns that she doesn’t speak to him very often- and rarely allows her boys to talk to their father. Phaedra revealed to her mother that he asked for a divorce- and she isn’t going to fight him on it. Seems like more of the same from last season- Peter and Cynthia meddling in Phaedra’s affairs.

Kandi sees her doctor for her first ultrasound appointment. She sees the baby on the screen and worries something is wrong. She cries, “Is there something wrong?” Porsha seems much happier this season and wants to a child. She has a new man in her life- much younger than her apparently. Kandi asked her if he was legal. She replied, “Barely.”

Nene Leakes and Claudia Jordan left the show. Nene had been threatening for years she was leaving the show, and it looked like this time she was telling the truth. (Surprise! surprise!) Claudia Jordan was a cast member who wasn’t well received by the fans. She went toe-to-toe with Nene, but man fans felt she wasn’t a great fit for the show.

Are you excited about the new season? It looks like finally after several seasons of hinting that Peter Thomas was cheating on Cynthia- it will finally come out. Will Kenya finally find love? How will Kim Fields, Shamea Morton and returning cast member, Sheree’ Whitfield fit in the show? Find out on November 8th on BravoTV. Don’t forget to come back later for more “Real Housewives of Atlanta” spoilers, rumors, and news!