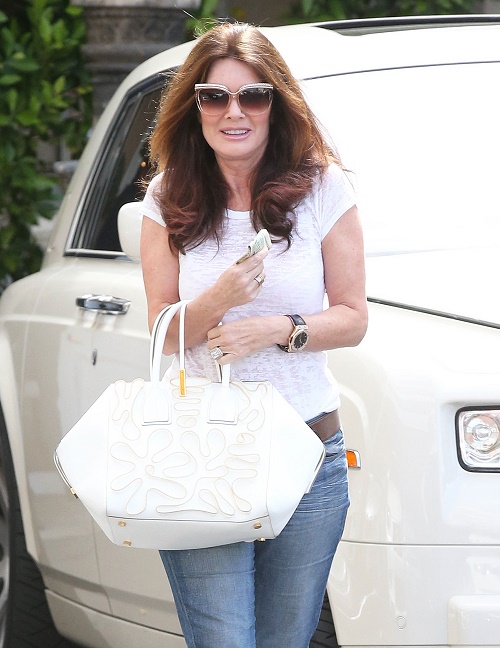 Is Bravo matriarch Lisa Vanderpump returning to Real Housewives of Beverly Hills? Bravo is currently putting together the Season 6 cast of RHOBH, and rumors are running rampant that multiple veteran cast members are being fired and a crop of new housewives are being hired. Kim Richards and Kyle Richards’s spots on the cast are currently being questioned – but another casting rumor that has been recurring over the course of the last few weeks is that Lisa Vanderpump is up on the chopping block as well.

Lisa Vanderpump has been on Real Housewives of Beverly Hills for years, and even scored her own successful spin-off reality TV show, Vanderpump Rules. However, throughout Season 5 of the show, Lisa rubbed some of her fellow cast members the wrong way, and the drama was clearly taking a toll on the restaurateur. Season 6 casting spoilers have been teasing that Bravo is considering knocking her down to just a recurring character so that they can bring in some fresh new faces and rejuvenate the reality TV show. Of course, Lisa has a following of diehard fans, and they would still be able to tune in to see her on Vanderpump Rules.

Lisa recently discussed her status on Real Housewives of Beverly Hills at fellow housewife Lea Black’s book signing. ET Online asked Lisa if she would be returning for Season 6 and Lisa replied, ““You know what, that’s the million-dollar question isn’t it? I don’t know. I mean, I’ve done five years and it’s been an incredible time. It’s up to Bravo. Everybody’s talking, doing negotiations. So, we’ll see. I’m busy doing Vanderpump Rules, and I’m running my businesses and doing my charities. But it’s always been an amazing experience.”

So, Lisa Vanderpump apparently has no idea whether Bravo will bring her back for Season 6, or is just playing coy and doesn’t want to give away the news yet. Regardless, that doesn’t exactly sound like something a person confident in their job status would say. What do you think, RHOBH fans? Would Bravo ever fire Lisa Vanderpump, or demote her? Which housewives do you think will be back for Season 6? Let us know in the comments below!