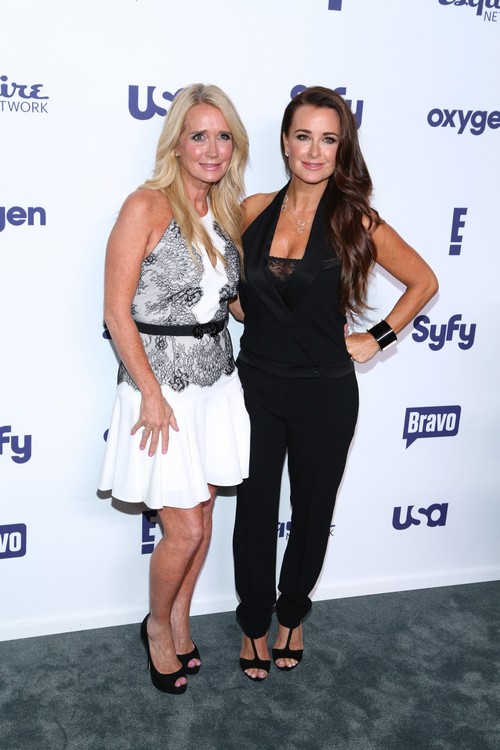 Kim Richards’ drinking problem has reportedly gotten her fired from Bravo’s hit reality TV series Real Housewives of Beverly Hills, and her sister Kyle Richards won’t be far behind her. Kim Richards has relapsed more times than we can count this year – and the Housewife has turned in to a reality TV cliché, the drunken 50 year old mother can’t seem to get her life together. And, Bravo is done trying to keep track of her while she is off on her drinking benders, she is a loose cannon and a liability for the show.

It’s no secret that Kim Richards was a recovering alcoholic, and it was obvious she had relapsed in April when she was arrested for fighting and public intoxication outside of the Beverly Hills Lounge. However, Kim denied the allegations that she had been drinking and continued to insist that she was still sober. Nobody has been buying it though, nor was anyone shocked after her daughter’s wedding in May when she went on a week long drinking bender in Mexico.

Kim Richards’s sister Kyle Richards is reportedly done with her and cutting her off – and so is Bravo. A new report from Radar Online’s inside sources reveals that on Wednesday June 3 the decision was made by the network to fire Kim. The source dished, “When Kim went missing in action she refused to answer calls of anyone from the network for the entire time. They had to find out about her entering rehab again from a family member. They decided that it was time to let her go because there was a lack of communication, and they are glad to see her go. Finally, they can no longer be held accountable for her misconduct.”

According to Radar’s sources, Kim Richards isn’t the only one being let go – her sister Kyle Richards is up on the chopping block too and will soon be fired from Real Housewives of Beverly Hills as well. Bravo was not impressed with Kim and Kyle’s drama this last season nor their behavior at the reunion. And, Kyle has already landed a new gig on TV Land, so it seems pretty obvious that she is on her way out too – or perhaps has already quit before Bravo gets a chance to fire her.

So RHOBH fans, will you miss Kim or Kyle on the show? Do you think Bravo made the right decision to let Kim Richards go since she can’t seem to stay sober and is not making a real effort to do so? Let us know what you think in the comments below!