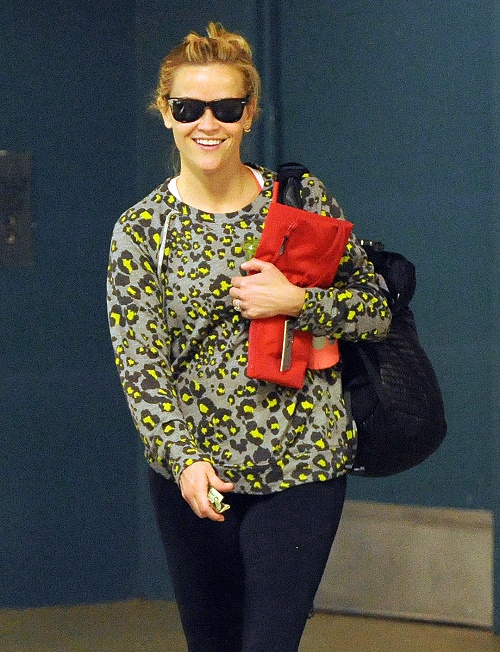 Reese Witherspoon and husband Jim Toth were on the verge of a divorce – but they are back on track because the actress quit Botox to save her marriage. Reese and Jim’s marriage was a bit on the rocky side over the past year, but new reports reveal that the actress and talent agent are now better than ever, all because Reese ditched the Botox injections and opted to age gracefully. Seriously? Yeah, we’re not buying it either.

The April 13th edition of OK! Magazine reveals, “Since giving up Botox treatments Reese Witherspoon may have a few wrinkles – but her relationship with her husband is tighter than ever! Sources say Jim Toth hated how Reese used to obsess over her flaws and loves her new natural look.” According to OK! Magazine’s insiders, “Reese used to hung up on superficial stuff that grated on Jim’s nerves and lead to arguments. But Reese quitting her quest for perfection and aging gracefully has Jim thrilled. He thinks she is the most beautiful woman in the world.”

Okay, so Jim Toth and Reese Witherspoon’s marriage is perfect now because she quit getting Botox? What about her career though? Jim Toth is a talent agent and has moonlit as an actor, he knows that in this day and age cosmetic procedures like Botox are basically a must in Hollywood once you get past a certain age. We don’t think it’s right, but it is the ugly truth. Many actresses that “age gracefully” have a tough time finding work. Regardless of whether or not Reese Witherspoon’s career choice requires Botox – the bottom line is no marriage can be saved by quitting Botox. There is no way they were on the verge of a divorce, and now perfectly happy just because Reese is “aging gracefully.”

What do you think? Were Jim Toth and Reese Witherspoon really getting a divorce over Botox? Do you think all of their problems are gone just because Reese agreed to “age gracefully?” Should Jim Toth be more understanding considering he works in Hollywood and knows how cruel the business can be for middle-aged women? Let us know what you think in the comments below!