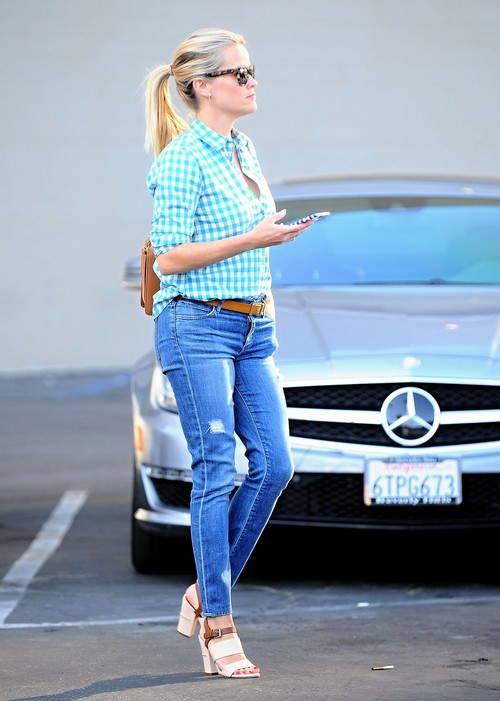 Reese Witherspoon’s new website is putting Gwyneth Paltrow and Blake Lively out of business! Apparently, you aren’t a bone fide celebrity unless you have your own lifestyle website to sell over-priced items to gullible fans. Gwyneth Paltrow began the nonsense with her website GOOP, which has turned out to be a total money pit. Blake Lively jumped on the bandwagon and created her website Preserve, which fairs a little better than Gwyn’s but isn’t by any means profitable yet. While Gwyn and Blake were going to war with Preserve and Goop, Reese Witherspoon snuck in unexpectedly and blew them both out of the water with her new website Draper James.

According to this week’s edition of Star Magazine, Reese Witherspoon has won the blog war hands down – and Blake and Gwyn are not happy campers. An insider dished to Star, “Gwyn is really annoyed that Reese swooped in with her website and eclipsed Goop entirely. Draper James’ ladylike Southern vibe has become a one-stop shop for belles needing a new dress, bauble, or hostess gift. Both Blake and Gwyn are seething with jealousy at how successful Reese has been right out of the gate.”

Reviewers on Gwyn site Goop have criticized her products for being “preachy” and over-priced. Meanwhile, over at Blake’s site, her reviews claim that the items she is selling are “too cheap” and not great quality. Reese seems to have found a niche, and a happy medium between Blake and Gwyn – and she is laughing all the way to the bank. Have you ever shopped on Goop, Preserve, or James Draper?

Which website do you think is the best? How funny is it that Reese’s website is not even half as old as Gwyn’s and already bringing in more money?  Share your thoughts in the comments below!

Reese Witherspoon meets up with her ex-husband Ryan Phillippe and their daughter Ava on August 4, 2015 in Westwood, California. FameFlynet