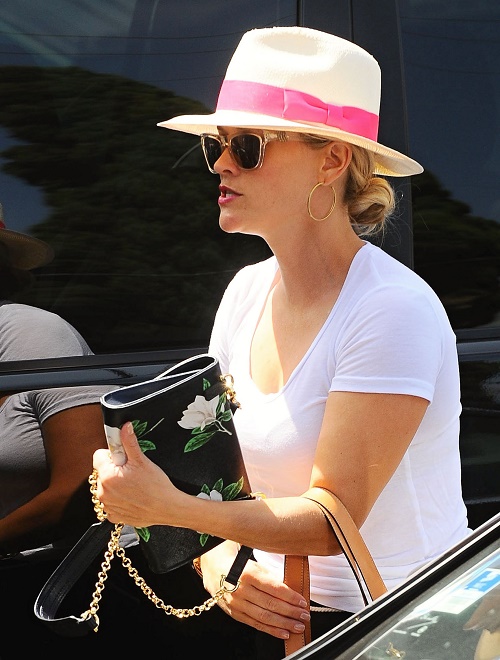 Reese Witherspoon and her husband Jim Toth will never be able to live down their wild arrests in April 2013. A police officer pulled over their vehicle, and both Reese and her hubby were wasted. When Reese realized that Jim was about to be arrested for drunk driving she began acting up and was caught cursing out the arresting officer on camera – while she shouted “do you know who I am?” Although Reese has worked hard to clean up her image after the drunk and disorderly conduct arrest, her husband, Jim Toth, has no intentions of changing his ways, and he is still drinking like a fish!

Jim Toth apparently frequents a local bar right by his and Reese’s home on a daily basis – and patrons at his favorite watering-hole have been dishing the dirt to Star Magazine. One witness at the bar told Star, “Jim is a big fan of happy-hour drinks. He comes in several times a week to watch whatever sports game is on TV. Staff members roll their eyes when he walks in because they know what is coming.” The source goes on to reveal that in one sitting Jim drinks multiple beers, mixed drinks, and shots until he is usually belligerent – and then he begins shouting at the TV.

Rumors have been floating around about Reese Witherspoon’s marriage being on the verge of a divorce for quite a while – and the crew at Jim’s favorite bar seem to think there is some truth to those tales. Not only does Jim obviously just “not want to go home,” but on more than one occasion he has tried to “chat up” girls at the bar. Luckily for Reese, the women that catch Jim’s eye usually dismiss him, and leave the bar just to get away from him.

Could Reese Witherspoon and Jim Toth be on the verge of a divorce? Do you think Reese knows about her hubby’s drinking habits? Let us know what you think in the comments below!