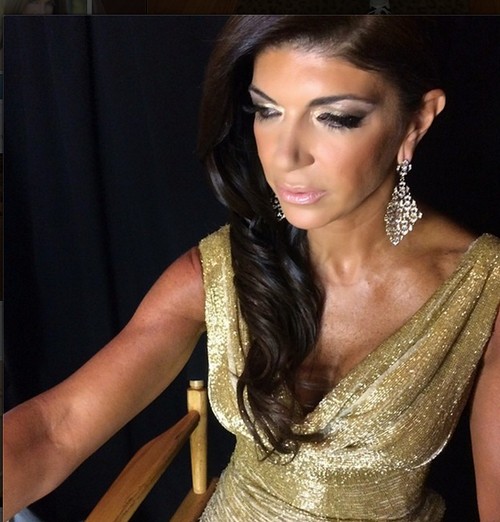 In 2014, Teresa and her RHONJ co-star and hubby, Joe Giudice, pled guilty to various fraud charges and wire-fraud after scamming millions of dollars in loans from more than one bank. Teresa Giudice insisted she had no problem giving up her ritzy reality TV lifestyle to head to the women’s prison and pay her dues. But what Teresa didn’t realize was that she was also going to have to give up her prescriptions when she went behind bars – and that apparently is turning out to be a major problem.

According to the January 26th edition of OK! Magazine, Teresa Giudice’s prison term is not off to a stellar start and the Real Housewives of New Jersey star is suffering from major drug withdrawals right now at Danbury. A RHONJ snitch revealed that “Teresa Giudice has been taking Xanax and Valium for at least five years. She wasn’t seeing a real doctor; she used to ask friends if they had prescriptions. She was popping several pills a day. Teresa has to go cold turkey. The staff won’t give her any meds to ease the withdrawal. She’ll get sick and have actual delirium tremens – the shakes. It’s not going to be fun.”

OK! also teases that on top of the prescription pill she has been popping illegally, Teresa was apparently also getting HGH (Human Growth Hormone) injections to make herself appear more muscular without actually working out, and after several years of daily injections her body will react badly without those drugs as well. At this point, we really have no pity for Teresa Giudice, but we’re not entirely convinced her “withdrawals” are going to be as bad as the tabloid is implying. Sure, she will be irritable for a few days, maybe even weeks, but she will survive – it’s not like she is quitting heroin cold-turkey.