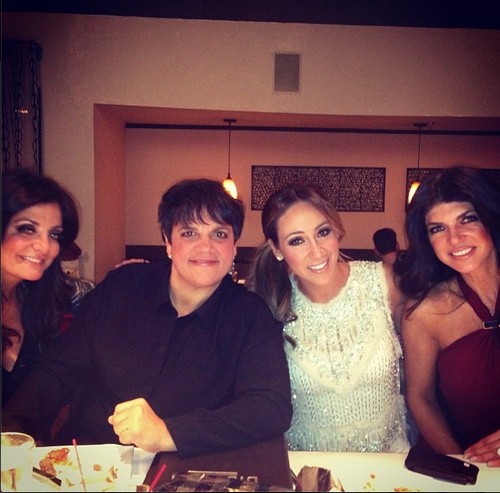 Teresa Giudice has been in prison for less than a week, but according to a new report by Naughty Gossip, her sentence has been commuted from 15 months to six months. Teresa entered the Danbury Federal Correction Institute in Danbury, Connecticut earlier this week, but Teresa has reportedly earned a release date in February 2016, six months earlier than her scheduled release date.

A source tells Naughty But Nice Rob, “No way will she serve anything like 15-months. She will be out in 6 months max.” Honestly, that’s not too surprising, considering the fact that Teresa Giudice is a fairly famous reality TV star. No matter how low on the totem pole, celebrities – even D-list ones – manage to get some favoritism from the justice system. By all rights, Teresa Giudice and Joe Giudice should have been locked up for years for the fraud they committed, but not only were they given leniency for the amount of time they’d serve in prison, the judge actually separated their sentences so it would be easier on their children. Now, you tell me whether some random trailer park couple in some hick town in Minnesota would have been given the same deal? Obviously not.

It’s not clear whether Teresa’s prison sentence was reduced for good behavior, since that’s the most commonly cited reason for reduced sentences. However, she’s barely been in prison for a week, so I don’t think that would be a valid reason. More than likely, Teresa cut some backroom deal with the DA and the prison, and perhaps there was some pressure from Bravo as well. After all, we’d heard that The Real Housewives of New Jersey was on the chopping block over Teresa’s absence, so perhaps Bravo is pulling out all the stops to get Teresa to return before its too late.

What do you guys think is the reason that Teresa Giudice’s prison sentence was reduced to six months? Could it have had something to do with The Real Housewives Of New Jersey? Let us know your thoughts in the comments below.