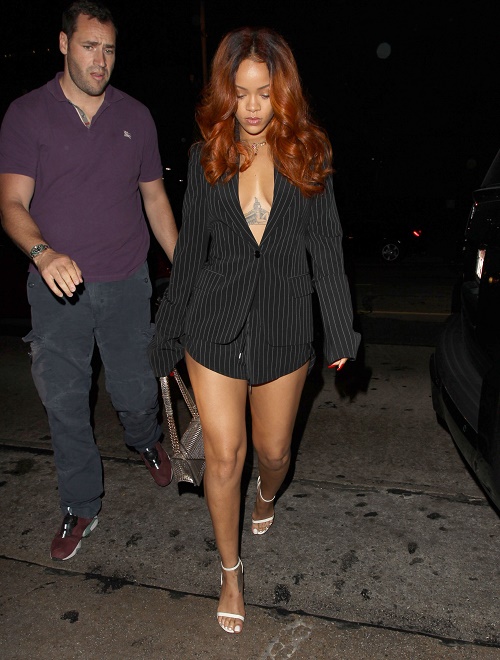 Rihanna has a new boyfriend! Just a few short weeks ago Rihanna was spotted out on what appeared to be a date with 27 year old French soccer player Karim Benzema. Considering Rihanna’s track record, and how quickly men come and go in her life, not too many people got excited about her date with Karim and figured he was just another flavor of the week for the hip-hop singer. But, according to a new report, Rihanna and her new soccer-playing boyfriend really hit it off and their relationship is growing serious rather quickly.

Rihanna was spotted out on a date with Karim Benzema on June 2. And, since then their relationship has been on a fast-track, Rihanna already introduced him to her family! The June 29 edition of Life & Style Magazine reveals, “Rihanna didn’t waste any time introducing Karim to her nearest and dearest. She flew Karim and some of his soccer teammates to Los Angeles, and then flew in her family from Barbados for a big gathering! They had a blast just relaxing and partying with everyone.”

Since Rihanna introduced Karim to her family from Barbados, the couple is still going strong – they were recently spotted out on a date together at Henry’s in Los Angeles, and eyewitnesses say that Karim stopped at a street vendor and purchased a bouquet of flowers for Ri Ri before they hopped in their SUV and headed to the next party.

Do you think that Rihanna and Karim Benzema make a cute couple, or is Rihanna moving a little too fast with the French soccer player? Could he be the one guy to finally tame Rihanna and convince her to settle down and be in a monogamous relationship? Or do you see break-up in their near future? Let us know what you think in the comments below!