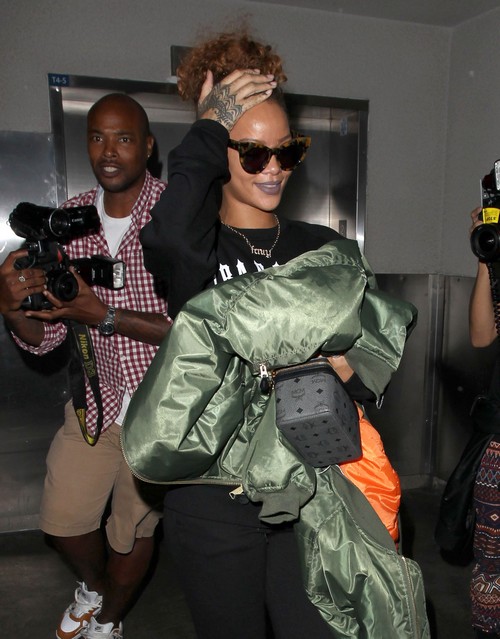 Maybe she learned it from Chris Brown, but Rihanna knows how to deliver a knock-out punch – and this time she landed it square in the face of good-girl songstress Taylor Swift. Rihanna just covered the UK’s newest magazine, NME, and made it clear that she will never be one of the seemingly endless lines of celebrities that make cameos at Taylor Swift’s concerts.

Recently, T-Swift has been joined on stage by the likes of Wiz Khalifa, Omi, Justin Timberlake, Selena Gomez, Beck, John Legend, Fetty Wap and even Lisa Kudrow channeling Phoebe Buffay to duet on Smelly Cat. But Rihanna vowed that she’s one cat that will never share the stage with Swift.

That sounds reasonable, but that’s just a polite cover story for the real reason RiRi is publicly dissing Taylor. Come on, let’s think about it – Wiz Khalifa is not exactly sympatico with Taylor Swift’s “brand” either. Khalifa is an unapologetic and enthusiastic marijuana advocate and imbiber – a far cry from Taylor’s squeaky clean image. And Fetty Wap is being investigated for allegedly assaulting a woman.

So Rihanna’s “brand” comments don’t make sense. Taylor has welcomed an astonishing array of diverse guests from rappers to folk singers to activists, athletes and actors. And by “role model” what’s obvious is that Rihanna means Taylor Swift is boring. In that, Rihanna has a point. If the music industry was high school, Taylor Swift would be the one nice cheerleader on the squad that does volunteer work.

Meanwhile Rihanna would be the naughty girl who smokes pot under the bleachers and makes out with bad boys. You’ve got to love that vibe – heck I definitely wasn’t a cheerleader in school… And in addition to Rihanna thinking that Taylor and her girl squad are too goody-two shoes and dull for her, Rihanna is also still clearly taking sides in the Katy Perry vs Taylor Swift feud.

Clearly there is lots of bad blood between Taylor Swift and Katy Perry – enough so that Taylor broke her trend of writing scathing songs about her ex-boyfriends to pen a scathing song about ex-BFF Katy Perry. And to add vivid insult to injury, Taylor shot an over the top video for Bad Blood chock-full of celebrity cameos that made it clear that most of their shared friends are firmly in Team Taylor’s camp.

In the Perry-Swift split, Swift has taken custody of the good-girl clique that Katy Perry was once part of, but Rihanna is decidedly Team Katy. Rihanna and Katy Perry were out partying in New York in late August and rumor has it that Rihanna is writing an anti-Swift song as revenge for the Bad Blood diss against Katy.

Looks like the Bad Blood between the two sides is far from over – so whose team are you on? Team Rihanna/Katy Perry or Team Taylor/The Good Girl Gang? Leave your comments below and tell us what you think!