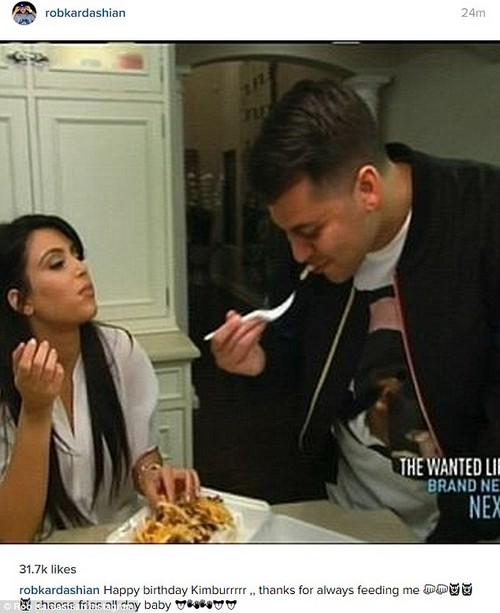 Is it Kim Kardashian’s fault her little brother Rob got fat? Rob Kardashian wished his sister Kim Kardashian a happy 35th birthday on Instagram – and of course he couldn’t do so without throwing a little bit of shade her way. Rob’s weight gain has been in the media for over a year now, and it’s no secret that he and Kim were feuding over his appearance.

Kim even dissed Rob in an interview and stated that she had no pity for her brother and the reason he gained so much weight was because all he did was eat, party, and play video games. Then, Rob fired back with a social media post saying his sister Kim was the “psycho bitch from Gone Girl.”

Ironically, the picture Rob pasted on Instagram for Kim’s birthday was an older photo of the siblings, and they are eating cheese fries together. Rob captioned the photo, “Happy birthday kimburrrr…thanks for always feeding me cheese fries all day.” Of course, Rob’s eagle-eyed followers picked up on the not-so-subtle shade rather quickly. It seems like Rob is implying that Kim is part of the reason he gained so much weight to begin with.

You can’t ignore the irony – Kim slammed Rob for gaining weight and fat-shamed her own brother. But, at the end of the day she was just as much an enabler as their momager Kris Jenner, and she was encouraging him to eat cheese fries “all day every day.”

Rob has been reportedly losing weight and working on his health, and counting down the days until he makes his beg debut of his new body – and puts all of his family, especially Kim, in their places.

Do you think that Rob Kardashian was implying Kim Kardashian is part of the reason he gained so much weight to begin with? Or was it all just a mere coincidence that he put on 100 pounds and his sister was encouraging him to eat cheese fries every day? Share your thoughts in the comments below!