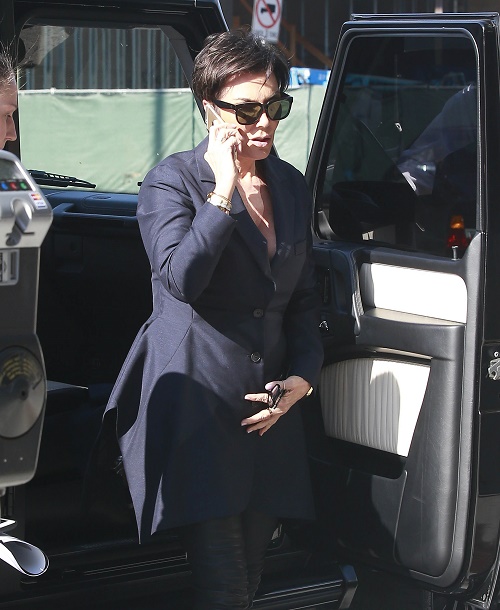 Rob Kardashian hates his momager Kris Jenner, and the rest of his fame-whoring sisters for using his battle with depression and alleged drug abuse to boost ratings on Keeping Up With The Kardashians. It’s bad enough that Kris is exploiting her own son’s problems on a TV show, but he’s not even making a penny from E! for the embarrassing footage. Rob has been at war with Kris Jenner and his sisters for months now, and Kris just keeps making matters worse.

We’re not sure if Kris Jenner is really that dense and doesn’t think before she speaks – or if maybe this was just some not-so-subtle shade at her real son Rob Kardashian, since he has been reportedly selling tabloid stories about his family. Rumor has it that the Scott Disick having sex with all of Kourtney’s sisters sagas was all courtesy of Rob. Regardless of whether or not it was intentional, Kris threw some serious shade at her son Rob on Kanye West’s birthday. Not only did Kris skip Rob’s recent birthday, but then she turned around and called Kanye her “son” on his birthday and showed him more love than she did her own son Rob.

To celebrate Kanye West’s birthday, Kris Jenner took to Instagram and wrote, “Happy Birthday to my son @kanyewest #KanyeWest!!!! You are such an amazing Daddy, husband, friend, son and brother…you are such a special part of my family and we feel so blessed. Thank you for sharing your passion, creativity and love with me each and every day. You are such an inspiration! Have the best day!!!”

Kris Jenner insists she is not a monster momager, and she and her real son Rob Kardashian are on good terms. In her dreams! It’s safe to assume that Rob Kardashian is not happy about his mom’s later proclamation of love to her “son” Kanye West. Apparently, Kris is more willing to claim Kim’s husband as her son than she is her real son. How do you think Rob will react to Kris’s birthday message to Kanye? Did she cross a line, was she intentionally dissing Rob? Let us know what you think in the comments below!