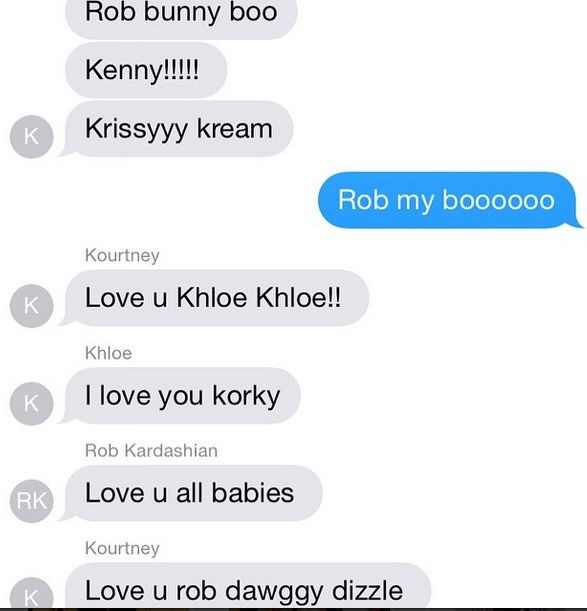 Rob Kardashian hates his momager Kris Jenner and the rest of his famous Kardashian sisters – especially Kim Kardashian. The troubled reality TV star reportedly has an axe to grind with even Kendall Jenner now – because she was partying with his ex Rita Ora at Cannes Film Festival. We have been following Rob Kardashian’s revenge for weeks now – and he is just getting started. Rob is determined to destroy his family’s reputation, but Kris Jenner has been trying desperately to clean up his mess and insists that they are a happy family.

In a sad attempt to prove that Rob Kardashian is on speaking terms with his famous family, Kris Jenner posted screen shots of a text message allegedly from her son on Instagram. It’s a group conversation supposedly between Rob, Kris, Kourtney, and Khloe, and Rob texts “Love u all babies.” His sisters reply by saying that they love him too. Here’s the thing though – Kris Jenner is a compulsive liar, she has been caught in so many lies that she herself can’t even keep them straight. The screenshots could have been easily faked, or they could have been from a conversation that occurred a year ago or more.

Rob Kardashian is out for revenge, his family just embarrassed him and aired his dirty laundry on Keeping Up With The Kardashians – after they cut him out of a multi-million dollar deal. On top of that, Khloe ranted on their TV show that Rob was “partying with whores,” and Kris tried to stage a half-hearted intervention. Not only is Rob Kardashian living off from money he makes by selling stories about his family to the tabloids – he is currently in the process of suing his own family for using his name and his personal problems on KUWTK. Sorry, Kris, but we’re not buying it – your family is not half as happy and lovey-dovey as you are implying.

The last thing Kris Jenner wants is for everyone to realize what a cold-hearted monster she really is (like we don’t already know). So, her screenshots of conversations that either never occurred or occurred months ago are just a desperate attempt to make it seem like Rob isn’t at war with her and his sisters. Do you believe that the text messages are from Rob Kardashian? Were they faked, and another one of Kris Jenner’s lies? What do you think Rob will do in retaliation to Kris’s fake text messages to prove that they are not a happy family? Let us know what you think in the comments below!