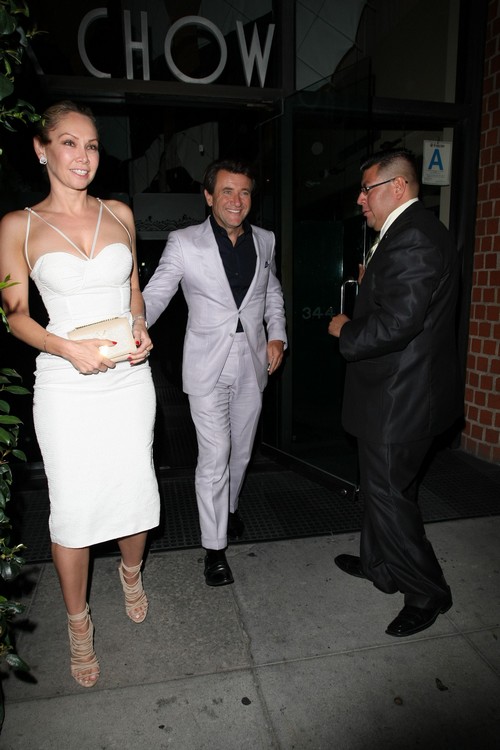 Are Robert Herjavec and Kym Johnson getting engaged and married? Robert Herjavec and Kym Johnson were paired up during Season 20 of Dancing With The Stars, and instantly there were rumors that the pro dancer and Shark Tank millionaire were dating in real life – just like basically every other couple on DWTS. But, it turned out that Robert and Kym really did wind up dating! Herjavec and Johnson played coy for months, and although they wouldn’t deny their relationship, they wouldn’t confirm it either. Although it did become pretty obvious when they vacationed together after they were eliminated from the dancing competition.

Recently, Kym Johnson finally spoke about her relationship with Robert Herjavec, and the happy couple has been PDA-ing all over Australia and America. They recently travelled back to the states, and were spotted out together in Beverly Hills for a romantic dinner date for two. Robert and Kym kept their relationship secret (or tried to but failed) for several months, but recently they can’t seem to stop showing each other off. Word among their inner circle is that Robert has made Kym “an honest woman” so to speak and proposed to her.

Dancing With The Stars pro Kym Johnson was constantly being accused of being a gold-digger when she began hooking up with her much richer and much older boyfriend – so the pro dancer tried to keep their relationship on the down low and wouldn’t discuss it with the press. But, if Robert has proposed to her, that would explain why she is finally willing to confirm their relationship.

Now, their relationship seems more “real,” and less like she is just flirting with him so that he will take her on lavish vacations and shopping sprees. A source close to the situation dished to CDL, “Every one is certain they are engaged, but Rob and Kym won’t talk about it. They are probably planning some huge wedding announcement and don’t want to ruin the surprise.”

Do you think Robert and Kym are in it for the long haul, getting engaged? Is there still a chance that Kym is using him, or do you think her feelings are real? How will they make their engagement announcement? Let us know what you think in the comments below!