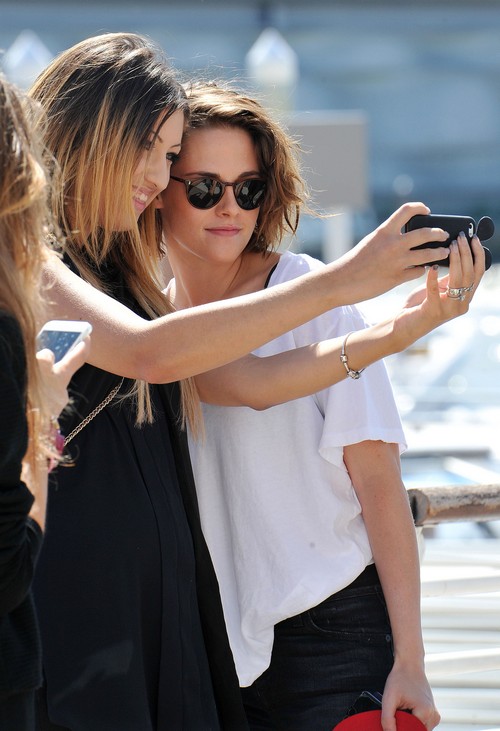 Twilight fans were counting down the days until Kristen Stewart and Robert Pattinson’s reunion at the Venice Film Festival – but R-Patz cancelled at the last minute so he didn’t have to see his ex-girlfriend. For two people who supposedly are SO over each other and could care less about each other, the former Twilight stars sure do go to great lengths to not have to see each other. K-Stew attended the Venice Film Festival with Nicholas Hoult to promote her new movie “Equals.” Pattinson was scheduled to appear for his film “The Childhood Of A Leader” – but he was no-show.

According to a report from Page Six, it was no coincidence that Robert Pattinson opted not to attend. An insider dished to Page Six, “He didn’t want the story to be all about how he and Kristen were nearly bumping into each other. Venice is very small … and there are only so many parties and hotels.” Now, Rob may have skipped the event just to avoid all of the “Cheating on FKA Twigs With Kristen Stewart” headlines, or maybe he just wanted to avoid an awkward encounter. Then there is always the popular theory among fans that Robert is upset that Kristen Stewart secretly married her girlfriend Alicia Cargile.

Last week a report hit the Internet (courtesy of People Magazine) that Robert and FKA Twigs had all but broken up, and they hadn’t laid eyes on each other in weeks. Ironically, the same week a report hit the internet that Kristen Stewart had married her girlfriend Alicia in a secret wedding. If there is any truth to the stories that Robert Pattinson is not over K-Stew, then it makes sense that he didn’t want to speak to her after she just got married to someone else.

What do you guys think? Why is Robert Pattinson avoiding Kristen Stewart? Is he jealous that she moved on with Alicia Cargile and possibly married her? Or is he just trying to avoid drama with FKA Twigs and knew she would freak out if he spoke to Kristen? Let us know what you think in the comments below!