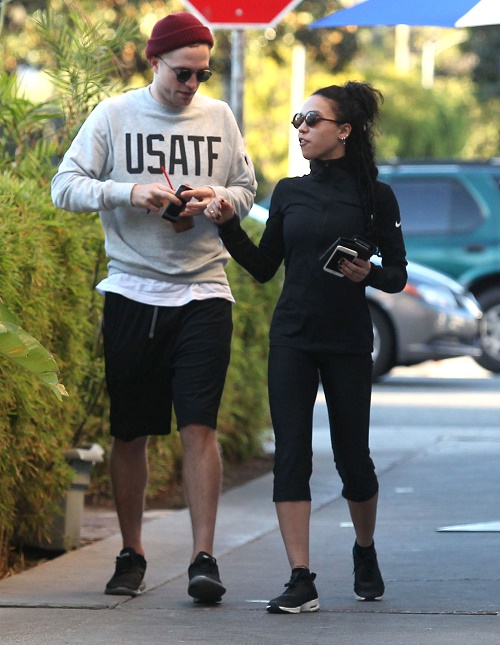 Robert Pattinson is officially engaged To FKA Twigs – much to the dismay of millions of disgruntled teen girls. Apparently Rob Pattinson and Twigs got secretly engaged right under our noses and didn’t both to tell anyone – until their pal T-Pain slipped up in an interview and mentioned that he and FKA Twigs’ collaboration might be on hold because she just got engaged to Rob. Rob’s friends and family have been skeptical of his new girlfriend FKA Twigs since he began dating the singer in 2014 and were concerned that she may be using the Twilight hunk for his fame and money.

The April 20th edition of OK! Magazine reveals that FKA Twigs is definitely wearing the pants in the relationship – and she is rushing Rob to the altar! An insider revealed to OK! that not only are Rob and FKA Twigs engaged, but she actually proposed to him. And, they already have picked out a wedding date and plan to say their “I Do’s in England.” FKA Twigs is wasting no time changing her last name to Pattinson. OK! Magazine’s insider explained, “Rob has been wanting to make it official for quite a while because he is so in love. He was thrilled to discover that she felt the same way – she actually proposed to him!”

We’re all for women’s equality and squashing gender roles – but we can’t be the only ones that think it is a little suspicious that FKA Twigs is the one that popped the question. That doesn’t exactly help her case in the argument of whether or not she truly cares about Rob, or is just using him to line her pockets and kick start her music career. Call us traditional, but R-Patz just lost some major hotness points in our books. Isn’t he supposed to be this super sappy romantic, wouldn’t you expect something a bit more heart-warming from him than his girlfriend informing him that they were getting married? Worst engagement story ever…

Do you think that FKA Twigs truly cares about Robert Pattinson, or is she in it for the fame and fortune? What do you think about Twigs proposing to Rob? DO you think they are rushing their wedding? Let us know in the comments below!