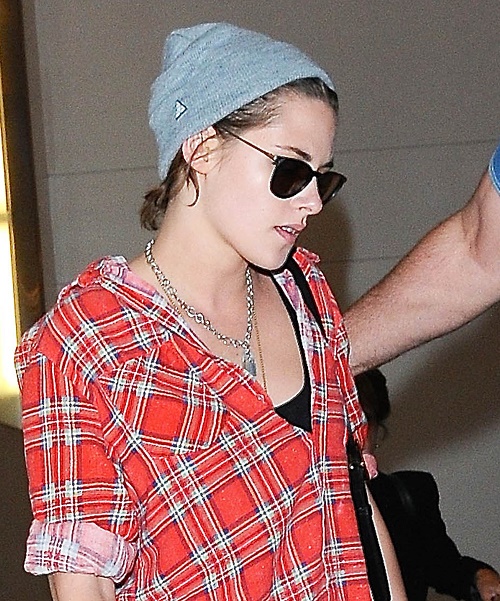 Is Kristen Stewart planning to marry Alicia Cargile as a rebound move after Robert Pattinson and FKA Twig’s engagement? Kristen Stewart and Robert Pattinson broke up a long time ago, but if the Twi-hard conspiracy theories are right, then Kristen never really recovered from the breakup. She may have always harbored a desire to get back together with Rob at the back of her mind, but eventually, it seemed like it just wasn’t going to happen. However, I don’t think anything drove the nail in the coffin deeper than the recent news of Robert Pattinson’s engagement to FKA Twigs.

Sure, Rob’s older now, and he’s probably surrounded by people getting married and having children. But you also have to consider the fact that Rob did choose FKA, in the end – not Kristen. However, a source also tells People Magazine that Kristen will ‘survive’ Rob’s engagement, explaining, “Kristen is doing fine, working and traveling, and she will survive Robert’s engagement. She has her own life and has moved on. Kristen lives a much more low-key life now and seems happier. It was obvious that she was struggling with the media attention [during her relationship with Rob].”

Hmmm.. The mere fact that this ‘source’ [cough, Kristen’s reps, cough] even spoke to People Magazine gives me pause. Why bother, if she’s going ‘survive’ the engagement – unless this whole thing has gotten to Kristen much more than she’s let on? Then again, Kristen could easily go and get engaged to Alicia Cargile, and she’ll have her revenge. It’ll be a giant F U to the public, and to Rob as well – ‘oh, you’re going to get engaged. Fine, I’ll also get engaged’.

What do you guys think? Will Kristen get engaged to Alicia Cargile as a way to spite Rob? Or do you think she’d never be that petty? Let us know your thoughts in the comments below.