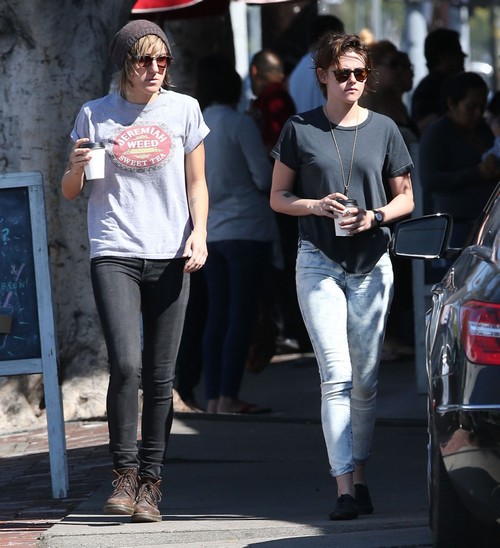 Kristen Stewart and Alicia Cargile are rumored to be planning a low key wedding after KStew comes out of the closet. Coincidently, Robert Pattinson has moved on with FKA Twigs, and speculation suggests he is “obsessed” with marrying the singer. Both marriages will effectively put an end to Twihards who still hope for a Kristen and Rob showmance reunion. Something both Rob and Kris have wanted since they finally split.

Kristen Stewart has built a career on indy films, but the Twilight franchise launched her into stardom. A large part of her current status in Hollywood is thanks to her showmance with Robert Pattinson. Fans thrived on their onscreen and offscreen relationship. Whether or not their romance was a PR move or legitimate love has been a repeated debate, but it helped them get the attention of studios and directors looking to cash in on their huge fanbase.

Some speculation suggest KStew’s relationships with men have all been fake. As CDL reported, rumors suggest Kristen Stewart “has never been straight” and even her scandal with Rupert Sanders might have been staged.

To be fair, we can’t forget about Kristen’s statement on the subject of her sexuality. The ‘Still Alice’ star seemed adamant when she said, “If I was a lesbian, I wouldn’t hide it. It’s nothing to be ashamed of!” Stewart has exactly been “hiding” anything. She had a relationship with Katy Perry’s assistant, Tamra Natisin, and she isn’t shy about holding hands or kissing Alicia Cargile in public. The two even live together.

A source squealed to Radar, “Kristen and Alicia are not only living together, but they act like an old married couple. With Alicia, Kristen does not have a façade. Very few people can actually get to know the real Kristen and that is how she likes it. But when Kristen is with Alicia, there are no walls around her. She not only acts like herself, but she is also incredibly genuine because Alicia brings out the best in her.”

It appears that she is through being private and shy, and wants to marry Alicia Cargile. Whispers in the Hollywood gossip ring suggest that Kristen and Alicia are planning a low key wedding to celebrate their relationship. Their engagement would serve as Stewart coming out and direct the focus on their wedding instead of KStew’s sexuality.

Keeping the wedding small and private would be Kristen’s style. Plus, a low key event would keep the media frenzy down. Her marriage would also finally sever her seemingly lifelong tie to Robert Pattinson, so it’s a win-win situation beyond spending her life with someone she clearly loves. What do you think CDL fans? Do you think Kristen Stewart marrying Alicia Cargile would be good for her and her career?