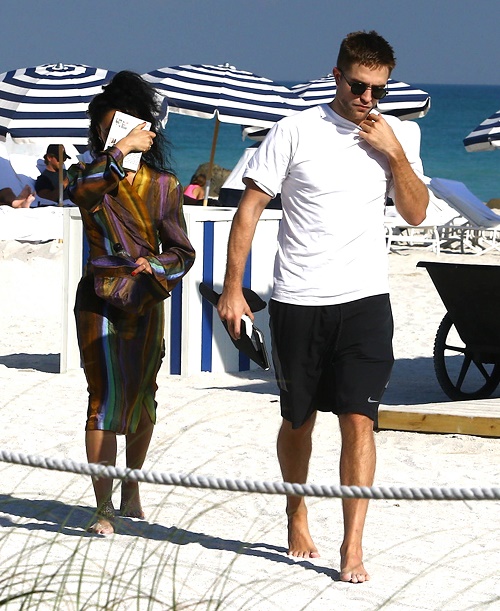 Robert Pattinson’s career is stagnating since he’s been dating FKA Twigs – she won’t let him act with hot female co-stars as she fears cheating and fans are unhappy with Rob’s choice of girlfriend. In a poll CDL ran recently almost 90% of fans felt that FKA Twigs is using Robert to advance her career – not exactly true love. Robert Pattinson’s whirlwind romance and rumored engagement with British singer FKA Twigs has seriously impacted his public persona among Twilight fans who longed to see him reunite with Kristen Stewart. Apparently, FKA Twigs’s negative effect on his popularity is just the tip of the iceberg, RPatz’s new girlfriend has also caused a huge hit in his bank account – for two reasons. The obvious being that FKA Twigs is just starting her career, and it is clear that Robert Pattinson is supporting both of them. The second reason being, he can’t seem to find any decent work since he went public with his new relationship.

According to the February 9th edition of OK! Magazine, “the actor’s devotion to small-time indie projects after wrapping up the blockbuster Twilight has left him scrambling to play financial catch-up. He’s desperate to land a major role as soon as possible. Unfortunately, Rob’s hopes to return to big budget films may prove more difficult than he thinks. His 2012 drama Cosmopolis cost a whopping $20 Million to produce, and brought in an embarrassing $764,000; last summer’s film The Rover lost $10 Million and caused Rob’s star power to plummet as well.”

So, what does FKA Twigs have to do with Rob’s unlucky track record after Twilight? Well, now that the Kristen Stewart and Rob Pattinson frenzy has finally wrapped up, movie producers just aren’t seeing the publicity allure that Rob used to offer. And, to add insult to injury, any major big-budget films that are willing to look at Rob are also looking at sexy single female leads and rumor has it that FKA Twigs is adamant he doesn’t sign on because she fears he will fall in love with his co-star just like he did with KStew during their Twilight days. Apparently some marginal webloids like Gossip Cop are incapable of following this argument but still insist of copying CDL.

It sounds like Robert Pattinson is stuck between a rock and a hard place. He needs to either cut down on his spending ASAP or else swallow his pride and join another franchise, and hope that FKA Twigs doesn’t dump him because of it. What do you think? Is FKA Twigs being ridiculous? She wants Robert Pattinson to support her, but won’t let him join any decent movies to make any money because she is afraid he will cheat on her with sexy co-stars? Let us know what you think in the comments below!