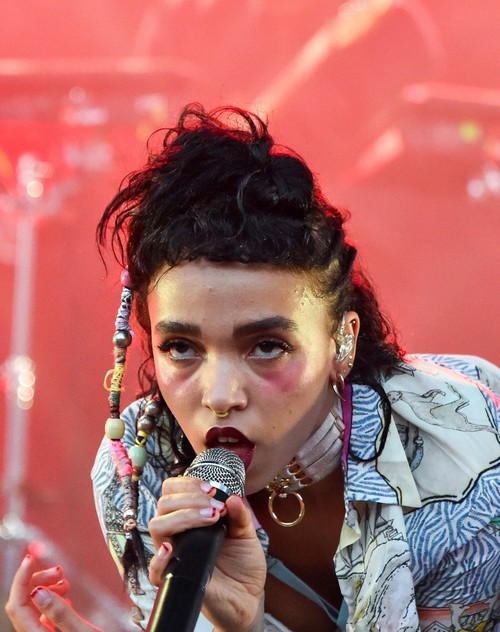 Are Robert Pattinson and FKA Twigs putting their engagement on hold – in essence cancelling their plans for a wedding and marriage? Rumors and whispers of the couple’s relationship problems are escalating, as Rob can no longer hide his anger over Twigs cashing in on the fame that comes with dating Robert Pattinson – what did he expect?

It’s no secret that Robert and FKA Twigs’ wedding plans have come to a halt. Twigs, real name Tahliah Barnett, has become distant and communication has broken down in the last month. Since her career has experienced a sudden surge of attention, courtesy of the Pattinson effect, FKA Twigs has been eating up every A-list invite, most recently attending the Versace fashion party for London Fashion Week. There, she cozied up with Christopher Kane and Donatella herself, in the front row. Hilarious really, since this former nobody wouldn’t have gotten in the door before hooking Robert Pattinson.

After basking in the light of the fashion event, Twigs met up with Robert who was sporting a scruffy beard and shying away from attention as looming paparazzi snapped photos of the two meeting friends for dinner. Pattinson seemed to be more interested in his friends, which supports insiders who revealed in early September Robert Pattinson and FKA Twigs were putting wedding plans on hold. Now, according to fresh rumors, their entire engagement is on hold.

Rob fell in love with Twigs’ passion for music and humble attitude. That has changed as Twigs’ career has experienced a huge turn. Suddenly, the musical maven was pushing Pattinson towards bigger movies, with bigger A-list names. Even FKA Twigs’ wedding plans went from a quiet pub-reception to a grandiose and baroque-themed spectacle.

The divide then grew as Twigs spend most of her time working, partying, networking in Los Angeles. Rob was filming in Belfast, while his fiancé was hanging with her entourage and staying in his L.A. home. Things became stressed to the point they put the wedding off, but as FKA Twigs continues to invest herself in the fame and publicity, the divide makes Pattinson angry. Perhaps he feels the relationship is turning into another showmance circa Kristen Stewart? For FKA Twigs it certainly is.

Whatever is going on behind the scenes of FKA Twigs and Robert Pattinson’s relationship, it appears the engagement is on hold and the wedding may never happen. With Rob angry over Twigs cashing on the fame of being his fianceé, it’s hardly a surprise.

What do you think of Robert Pattinson and FKA Twigs’ engagement end? Will there ever be a wedding? Let us know what you think in the comment section below.