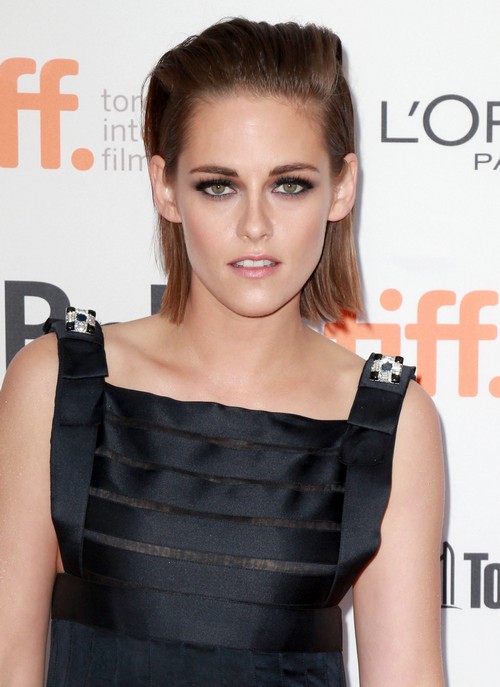 Kristen Stewart will turn into Grumpy Cat and bite her lower lip if you mention Robert Pattinson and the ‘Twilight’ saga that launched them both into levels of fame most superior actors can only dream of. However Stewart isn’t shy when it comes to using her showmance relationship with Robert for her new film, ‘Equals.’

The latest Drake Doremus film explores the life of a woman in a world where emotions have become a thing of the past and those who do expose their feelings are killed. Stewart’s character falls in love with her coworker named Silas, played by Nicholas Hoult. Yes, Jennifer Lawrence’s ex falls in for Kristen’s protagonist, Nia. The doomed lovers are forced to flee or face death.

While it may be an intense platform, it didn’t stop Kristen from using her showmance relationship with Robert Pattinson as a root for her character. Stewart told The Daily Beast, “It was incredibly painful. F**king kill me,” she began before toning it down and delving into the relationship. “It was a really good time for both of us to make this movie. Not all of my friends have been through what I’ve been through, or what some people have tasted at a relatively-speaking young age, and we were not expected to do anything. Everything that we did was explorative, and a meditation on what we already knew,” Kristen Stewart explained.

Kristen and Robert’s relationship was movie gold and helped pack movie theaters, despite the fact that they never really publicly confirmed their relationship. The Twilight franchise enjoyed billions in box office receipts worldwide. By the last film, ‘Twilight’ had nearly doubled its domestic opening weekend profits and its worldwide box office compared to the first film in the saga. Legions of fans, shipping Robert Pattinson and Kristen Stewart’s romance helped the series enjoy a huge success. Basically, Rob and KStew’s showmance was selling tickets.

So, it’s hardly surprising Kristen is trying to use that magic once again to pack theaters. Stewart continued to describe how she used her relationship with Robert in ‘Equals’ stating, “We all felt akin by how much we’ve been through, and to utilize that is so scary. And to acknowledge it, reassess, and jump back into it? Usually you want to move on,” Kristen confessed. “But at least we could use some of that for some good. This movie was a meditation on firsts, and a meditation on maintaining, and a meditation on the ebbs and flows of what it’s like to love someone—your feelings versus your ideals, the bursting of bubbles, the shattering of dreams you thought were possible, and what you have to contend with as things get more realistic.”

Both Kristen and Robert have moved on. Kristen Stewart has allegedly married her assistant, Alicia Cargile. Robert Pattinson is also said to be engaged to FKA Twigs, but one constant remains… Both Robert and Kristen will tell you how they hate to talk about ‘Twilight’ and their showmance before talking about ‘Twilight’ and their showmance in blunt and tedious detail. Cathartic? Maybe. For Press. More likely. Because it might be all they have ever done that matters to anyone but themselves, FOR SURE!

What do you think of Kristen Stewart using her relationship with Robert Pattinson in ‘Equals’? All for press or just part of life? Is Kristen reminding you of Selena Gomez using Justin Bieber for every new album release? Let us know in the comment section below.